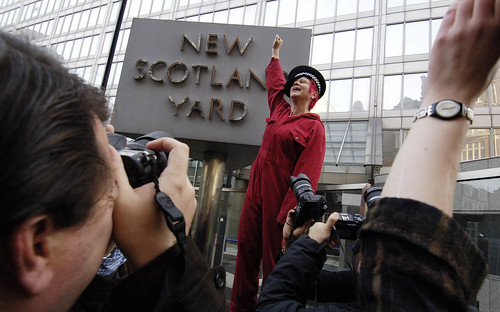 Quietly, over the past 12 months, the "frontline" in photojournalism has come back home to the West. Whereas the years since 9/11 saw the world go to war – with the journalists and photographers not far behind – now, in one way or another, the war is coming to us.

Take the World Press Photo prizes, dished out last week. Although a healthy proportion of the winning images and stories covered conflicts – like last year’s Russia-Georgia war – or political and social unrest in the developing world, the winning image was from much closer to "home".

Anthony Suau’s image of Detective Robert Kole inspecting a home in Cleveland, Ohio, after the eviction of its owners was one of just a few images of contemporary Western society ranked highly by the judges. That is to be expected. The key thing was that it won.

Notable photgraphers such as AP’s Kevin Frayer – a veteran of the Israeli-Palestinian conflict – or Noor’s Yuri Kozyrev, whose work from Iraq has long been well-regarded – were recognised in this year’s awards. Kozyrev even won the single shot portrait prize. But neither won the top prize.

Whatever the visual merits of Anthony Suau’s image, perhaps the greater significance lay in the fact the WPP judges felt able to consider an image made in the USA. Not since Lara Jo Regan won the prize in 2000 for her photograph of Mexican immigrants in Texas has the jury chosen a winning image from the Western world.

More evidence of the shifting frontline came in Britain this week, where professional and amateur photographers alike are up in arms over the enactment of new anti-terror legislation which many suggest will make it illegal to shoot pictures of police – explained admirably by Nick Turpin in the video below.

Several hundred photographers gathered outside New Scotland Yard to exercise their right to take pictures. Champions of civil liberties, like the Observer’s Henry Porter, found less likely allies in the Daily Telegraph and the former head of the security services, Dame Stella Rimington.

Dame Stella, perhaps coincidentally, was quoted the day after the photographers’ protest as saying the continuing erosion of civil liberties is pushing the UK towards a police state.

Even the Russians were curious, with news channel Russia Today interviewing staff at the British Journal of Photography on Britain’s remarkable tough new law.

It remains to be seen what effect the new law will have. As I blogged last month, there is already plenty of evidence of heavy-handed policing of working photojournalists, especially those documenting political dissent in the UK.

We don’t yet have a World Press Photo contender from the UK – apart from those working behind the lens. But as the prize judges and British legislators have each made clear in the past week, new frontlines are being drawn all the time.