A round up of some of Frontline Club events with Julian Assange.

In the build up to what should be a fascinating event, focusing on the ethics and philosophy behind WIkiLeaks, Frontline Club is posting a series of blogs giving an insight into the thinking of Assange and  Žižek.

Here is a round up blog post by Will Spens, published in December last year, of the talks and discussions Assange took part in at the Frontline Club: 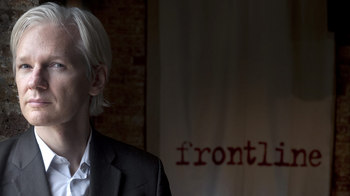 Subsequent to the previous evening’s release of 90,000 classified US military documents relating to the war in Afghanistan between 2004-2010, Julian Assange gave a press conference at the Frontline Club in front of many British and international journalists.

Further links to media coverage of this press conference can be accessed here.

Julian Assange was joined by the BBC’s Paddy O’Connell to engage the audience on the impact of the leaked classified documents which chronicle in detail US military operations in Afghanistan between 2004-2010.

A video and audio podcast of the event can be accessed here.

An interview with Julian Assange about the best and worse case scenarios for WikiLeaks can be found here, along with more analysis of the evening.

The data revolution: How WikiLeaks is changing journalism.

The controversy surrounding WikiLeaks’ historic release of more than 70,000 classified US military documents on the war in Afghanistan has not died down. But one thing is certain: online data and its dissemination is changing journalism and the relationship between the public and those in power. In this special event, we asked:

Following the leak by WikiLeaks of almost 400,000 secret US army field reports from the Iraq war between 2004 and 2009, Julian Assange was at the Frontline Club in conversation with one of the most famous whistle blowers in history, Daniel Ellsberg, who was responsible for the leak of the Pentagon Papers in 1971.

The event was chaired by Elizabeth Palmer, CBS News correspondent.

A summary and a video of the event can be found here.

WikiLeaks: The US embassy cables

Following the release of of 251,287 confidential United States embassy cables, December’s First Wednesday debate focused on the revelations of this latest leak from whistle-blower website WikiLeaks.

You can read a summary of the evening here and access a video here.