Not Invisible: London Premiere of The Invisible War

One issue of injustice in particular that the film tackles is the inward looking nature of the American military judicial System:

“I wasn’t aware of the extent to which the American military judicial system sort of only answers to it’s own and really, you don’t have recourse outside … it is astonishing.” Admitted Ziering.

The strong influence of an individual’s Commander in the way that a sexual assault case is dealt with, she said, was something they particularly wanted to address through the film. Bias in favor of the attacker who may have close ties to the Commander is common, which means that the only channel for seeking justice is shut off. The campaign surrounding The Invisible War however, advocates for the military to be accountable to civillian authorities as an alternative:

“We are pushing now to try and get the military to acknowledge that oversight would actually only make them a stronger institution … that’s the message we are trying really hard to articulate.” 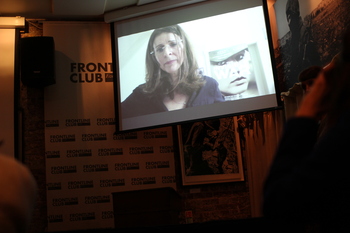 On being asked if there has been change in the aftermath of the film’s release, Amy Ziering was able to say yes. Through targeted screenings following the initial burst of interest when The Invisible War won the 2012 Sundance Film Festival Audience Award, they had reached several influential military figures:

“In doing my research I’d heard that you can legislate, can do grass roots, but if you don’t get the leadership on board in the military – nothing’s going to change … so to make a long story short eventually four of the five Joint Chiefs have now seen it including the head of the Joint Chiefs, General Dempsey.”

This, in turn, has affected policy and changed attitudes she explained:

“The army is embracing the film and we are on almost every army base – they bought it as a training tool.”

As a last note, Amy Ziering invited audience members to host screenings of their own:

“You never know who knows someone and it really makes a difference.”