Nine years on is the UN still failing Darfur?

Last night’s event at the Frontline Club saw a heated debate between the expert panel and the audience on the UN’s presence in Darfur. Chaired by Patrick Smith, editor of Africa Confidential, the discussion bought up many of the tangled complexities surrounding the conflict in Darfur. With the recent expulsion of the former UN head in Sudan and tensions rising in the Nuba mountains the UN has come under scrutiny, charged with failing the people of Darfur.

The discussion opened with Sir John Holmes, a former British diplomat and UK ambassador for France and Portugal. He claimed the UN had been given an impossible task dealing with a political system that was obstructing the UN, recounting the situation when he first arrived in Sudan:

“There were still regular attacks on villages by the Janjaweed, there was tribal fighting of different kinds, occasional rebel attacks form these forces and a very unstable security situation…the overall security situation was stuck, it wasn’t really moving, it was stagnant, there was no real progress and frankly it stayed that way throughout my time and its pretty much the same way now.”

Dr. Mukesh Kapila CBE went on to discuss the failures of not only the UN but of a collective failure on behalf of the international community:

“My journey did not start in 2003, it began exactly 10 years before in Rwanda…and there I saw for myself what happens when an international response system basically implodes because there are contradictions…if there is a failure it is a collective failure…this is all extremely relevant to why we failed in Darfur…. all the lessons of enquiry on Rwanda which were big enquiries of the system and produced a big report, all of [these] were forgotten.”

The deafening silence from the UN and lack of response to memos was described as an ‘amnesia’ from the very top as they remained seized up on the matter of Darfur.

Dr Ahmed Al-Shahi offered his opinion on why the UN has failed. When asked who was the principal author by an audience member, Al-Shahi went on to describe a number of factors, but it was apparent that a lot of the problems lay with the political system under President Omar Al-Bashir and his regime in Khartoum.

China’s involvement in Darfur and why the UN is not reacting as it has recently in Libya were just some of the issues raised. It seems the issue of Darfur shall remain complex, with the situation not reflecting well on the UN.

Mukesh made a poignant closing statement:

“The UN should honestly admit its failure and its paralysis, for the reasons we have been debating. But it’s a mother bearing child relationship, you can’t make yourself redundant, what it should not do is be false prophet, launch misleading missions, which distract and bring false hope…I think we should be honest, that’s what I am saying and I think the UN is bound to fail…we are talking about the 21st century with twitter and globalisation and we are dealing with an instrument that I think is a relic to the Second World War, and conflict after conflict it has proven that it can’t succeed.” 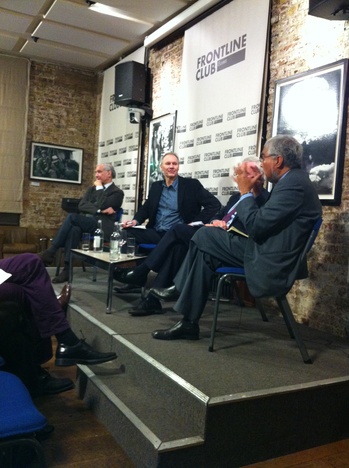