News Reporting: Is Gender a Factor?

This was the resounding conclusion of News Reporting and Navigating Risk: Is Gender a Factor? – a panel discussion at the Frontline Club on Tuesday 23 June organised in partnership with the International Women’s Media Foundation (IWMF) and the Frontline Freelance Register (FFR).

IWMF executive director and panel chair Elisa Lees Munoz opened the debate by presenting the results of the foundation’s recent survey of 1000 female journalists, of whom 20% had experienced some form of gender-based violence while on assignment.

“We were pretty horrified by that number,” said Lees Munoz. “But we were also pretty distressed by the fact that the majority of the perpetrators weren’t strangers… but were their colleagues, supervisors, fixers or translators.”

These risks can be difficult to mitigate against, said Caroline Neil, director of hostile environment training providers RPS Partnership.

“The risks that female media workers face are really intangible. The interpersonal relationship between you and your interpreter, fixer or male colleague who might have misconstrued the situation,” said Neil.

“It’s very difficult to mitigate those types of risks because it’s very much around your interpersonal skills, experience and whether you are susceptible.”

But the dangers to women journalists are by no means purely physical, said journalist Nadine Marroushi, who personally suffered post-traumatic stress disorder (PTSD) after being assaulted by a crowd while reporting on protests in Egypt’s Tahrir Square.

Psychological trauma resulting from sexual assault in the field continues to affect women long after the physical scars have healed. Yet PTSD can affect all journalists, regardless of gender, and is an issue the industry needs to urgently address, she added.

“It’s really important for journalists to acknowledge how things are affecting them and to create some kind of space where they can talk about those things,” said Marroushi.

That space just doesn’t exist at the moment, especially for local journalists who aren’t able to get out and get help, said documentary photographer and FFR board member Alison Baskerville.

“We can’t forget about local journalists. It feels like there’s this huge need for us to collaborate with all the knowledge that we have… so that we can educate ourselves and spread that further,” said Baskerville. 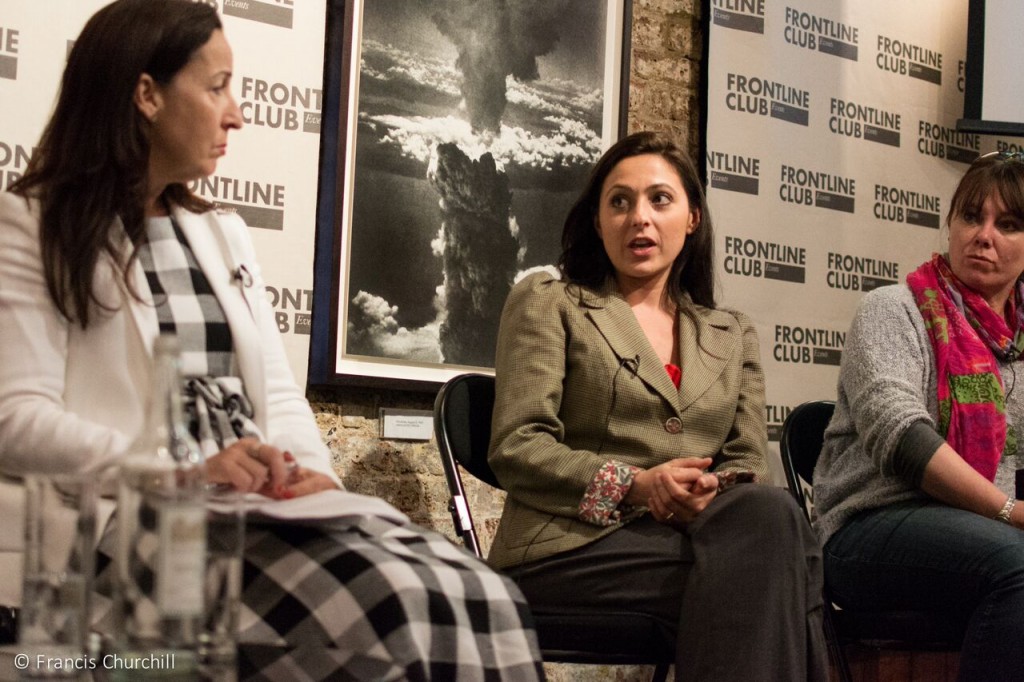 Richard Spencer, Middle East editor at The Telegraph, said that the culture towards mental health within media organisations is developing, with PTSD counselling now on offer for all who work with the paper. But many still fall through the gaps, he said.

“It’s difficult to see who takes responsibility for the longterm mental health of local hires such as translators, who may be working for fifty different places,” he said. “The policy is there, but the gaps for those who fall between them are very large.”

Excellent event @frontlineclub on the risks faced by women reporting in the field #journoselfcare – http://t.co/LucJzEmPCy

Chair Lees Munoz, who is helping to develop a call for international guidelines on hiring freelancers, told the Frontline Club audience that the IWMF is lobbying to include a clause for a no-tolerance policy on gender violence perpetrated by media employees.

She also stressed the need for international databases of trusted fixers and translators, global hostile environment training standards and for increased efforts to reach out to local journalists affected by sexual assault.