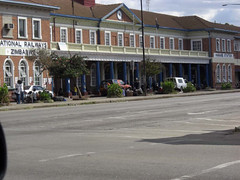 For a short while today I was a billionaire. I changed US$100 at a rate of 40 million Zimbabwean dollars (ZD) to the US dollar. In Zimbabwe everyone is a millionaire some of the time.

I couldn’t have changed more, even if I’d had room in my rucksack because apprehension about the outcome of tomorrow’s elections has people queuing in their hundreds outside banks to draw whatever they can. As a result there is little liquidity for the black market dealers out on the streets.

The meal had been pretty spectacular – a lamb curry at Amanzi, one of Harare’s best restaurants out on Enterprise Road as you head east away from the city centre. Not just because of the quality of the food, which was excellent, but because of the live music and party atmosphere in which it was consumed.

It was a respite from the rumour mill, from the seesaw between hope and despair that all Zimbabweans feel as the hours tick by and the moment comes when the people can have their say.

The trouble is that so many are convinced that their votes will not count in the usual way because the ‘Harmonised 2008 Elections’ are already rigged in Zanu-PF and Robert Mugabe’s favour.

“There is more excitement than in 2005 and that is down to Simba Makoni’s entry into the presidential race,” Pastor Rifa told me. “The only way to dislodge the tyrant is for all the opposition to unite and when the MDC split people were so disappointed they weren’t even sure it was worth registering to vote.” 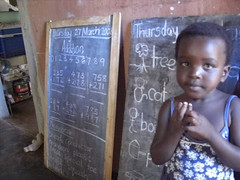 “But then Makoni declared – and voter registration in this constituency went up by 45% in a single week. Maybe he can’t win, maybe he will split the vote, but the thought that as a former Zanu-PF insider he will know how to beat Mugabe has given people renewed hope.”

Does he share that hope that Mugabe can be defeated? “Personally I believe the election has already been rigged before a single vote is cast. BUT if there is an overwhelming vote for the opposition maybe it will be too difficult to cover up.”

For Linda, the situation can hardly be worse. A supporter of the Arthur Mutambara faction of the MDC in Bulawayo, she has been out on the stump campaigning for Simba Makoni.

“My children are grown and gone. But last year a family came by to visit us, just as you are now. The two children were here playing in the garden as we spoke under the shade of the tree. I went to arrange some cool drinks and when I came back the parents had left, leaving these children that you see here now, with us.”

Linda and her husband are getting on in years, have no employment and no pension.

Her husband was a Zipra fighter in the second Chimurenga and so was targeted during the Gukurahundi repression of 1982. He showed me the scars from the beatings that nearly cost him his life.

They have long had reason to fear and loathe Robert Mugabe but had become disillusioned with the failure of Morgan Tsvangirai to find a strategy to oust him.

“But this time, God willing, it will happen. Change has to come, life is too hard here. Please pray for us that this time we can make it so.”

Lessons of the past decade

Electoral officials have traditionally called on teachers to act as polling officers during elections but this year it’s been a source of contention as the new rules require everyone to vote in their home town where they are registered. It has meant that anyone deployed outside their home town would in effect be disenfranchised.

Justin Moyo is so determined to cast his vote he chose not to volunteer as a polling officer this year. He has been on strike for weeks, tempted back by President Mugabe’s offer of a 4.5 billion ZD raise then frustrated when it turned out to be only 1.2 billion in the pay cheque.

“Not everyone even got that much. So even though we are supposed to go back to work for the start of the new term on April 29th, I think some teachers won’t go back then and we will be on strike again.”

“I think this time it will be tough for the old man, because he has never won a free and fair election.”

Then he frowns and asks if I think the election will be free and fair. I answer with another question – what was it like in previous elections? 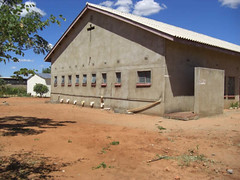 I go to the house of the fourth, and least known, candidate in this presidential election, Pastor Langton Tawungana, who lives in Mkhosana township, a high-density suburb of Victoria Falls.

The pastor isn’t home, in fact he is away in Harare, his wife says.

Mrs Tawungana is on her way to work and doesn’t have much time to talk about her husband’s candidacy.

Does he have prior political experience? “No”. Has he any experience of public administration? “No”. Not even at local level, in the town council? “No”. Has he ever been a member of any political party? “No.” So why is he standing?

“He felt a calling from God. He says the situation in Zimbabwe is crying out for heavenly intervention and that he was called upon to do something.”

And with that the interview is over. So I drive to Pastor Tawungana’s church. On the trees outside are posters for his rivals, Morgan Tsvangirai and Simba Makoni and in their shade lies a broken down van, its tyres flat.