Monkeys, demons and the dude

It wasn’t much of a surprise when the words “we’re taking indirect from the mountain” burst over the radio. The day had been long and so perhaps the threat had slipped to the back of my mind but as the message crackled over the interference I realised I’d spent the whole day anticipating it. Those few words had the effect of taking us from a Woman’s Institute tea gathering to a Rammstein concert in one fell swoop. At once I was being thrown around the back of the vehicle, still trying to scribble down what was going on, as we accelerated into the dust cloud being kicked up by the heavy-set tires of the vehicle ahead of us. Looking out the window I realised the view wasn’t making much sense and all I could really make out was an earth coloured fog with brief glimpses of mountain tops that were swaying viciously from side to side as if we were on a small boat caught in a storm but in fast motion.

In spite of the fact I was concentrating hard to try and copy the radio communications word for word, I wasn’t catching a lot except for the repetition of “Demon 26 this is Monkey Six” which didn’t seem like it was getting a lot attention. The first thing I clearly made out was “we’re still taking indirect three o’clock at three hundred metres” and then from one of the guys in my vehicle on the internal only channel “well if you know where they are then fucking shoot them” and before I know it we’re all genuienly laughing out loud albeit with brovado.

To begin with I was struggling to understand where exactly the action was taking place and then as the voices became clearer I recognised that it was the Commanding Officer who was calling-in the incoming and that he was some way down the valley ahead of us and moving at speed as we in turn were trying to catch up on him to provide assistance. We began to settle into what seemed like a rhythm or perhaps I just regained my calm or there was a moment or two’s radio silence which allowed me to break from my note pad. At any rate, I asked the crew whether we were still heading towards the contact, doing my best to use the right military language and being conscious of considering whether it should instead have been “towards the indirect”! The reply was a resounding “hell yes”.

We were moving at such a fast speed for the terrain, with such poor visibility that I wasn’t sure how we would know when we got there and without realising how silly it must have sounded to the guys hauled up with me in our bouncing bullet proof cubicle I blurted my question out loud and received the bloody obvious answer “don’t worry you’ll hear it”, accompanied by more laughter but this time with a hint of the cynical.

“Their indirect is effective, get some rounds up there” came over the radio in a no-bull-shit-tone and it occurred to me that I wasn’t sure what was being fired at us, in fact I wasn’t sure anybody was sure. After the first explosions I’d heard “IED” somewhere in the communications but as the explosions continued there seemed to be confirmation that they were mortars. Up until this point I’d been so carried away by the sudden shift in tempo that those first words had prompted, as if setting of a chain reaction or a natural sequence of cause and effect, that I really hadn’t taken in the fact that we might be in any danger. It was as if the vehicle had an environment of its own, like a war room, isolated from any bombardment behind the safety of its armour. But I knew fine well that a direct hit from a mortar round would most likely be end game and for the first time I had to tell myself to concentrate on what was going on around me.

Outside the terrain continued to look as if it was trying to dizzy me and my enthusiasm to catch up to the fight was not what it had been, instead the possibility of the fight catching up to us without us even trying to reach it cropped into my thoughts. What was to stop them lobbing the damn things in our direction? I think I can thank the call signs Demon and Monkey for stopping me trying to answer that rather pointless question. They were again demanding attention on the radio and somehow surreal enough to be sufficient distraction.

As if I wasn’t already entertained enough by the radio, the next snippet left me wondering exactly how much effort the military puts into sounding cool under any circumstances: “I need you off the net for a second . . . we’re calling in the dude”. For the last portion of our journey towards the attack’s epi-centre I mostly noticed updates on the dude’s progress, is the dude here, isn’t it, where is the dude, what is the dude?

At last we came to a stop towards the rear end of the column of vehicles and took our place facing into the hills as our gunner joined in the hunt for the insurgents on the mountain side, vigilantly scanning his screen, which showed the view from a camera mounted alongside the gun above us. The ANA claimed they had spotted bodies scrambling up the mountain but since they were looking at a point 960 metres away in the fading light of dusk and nobody else could confirm the sighting, they weren’t taken very seriously and I heard someone chirp “I think they just want to fire the RPG for the thrill”. By now the Dude was in place (I’ve yet to figure out what kind of plane this is) and whoever was up on the mountain had pulled of an effective disappearing act.

The last communiqué that could really be directly linked to the attack was “anybody who’s got their lights on, turn them the fuck off, cos you’re about to get shot up like that”. Everyone sat in calm for a good five minutes or so while the dude made its last passes and the gunners searched the rocky slopes of the west facing mountains for any movement. There was no more incoming. 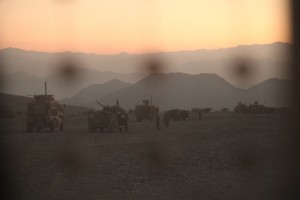 In the still after the attack I turned my attention back to the tiny window at my side and noticed several camels calmly chewing on what little foliage the valley offered. They didn’t look the slightest bit distressed by anything that had taken place. The mountains were now silhouetted in varies shades of pastel pinks and orange and as I went to take a picture through the window, I noticed the RPG netting blurred in the foreground very much like a cage around us and was reminded of the lyrics of a Pink Floyd tune: “And did you exchange a walk on part in the war for a lead role in a cage?”

I later learnt in conversation with the CO and the Lieutenant that some 25 mortars – which strikes me as a lot – were fired on the CO’s QRF together with machine gun fire, probably from a PKM. The mortar team apparently knew what they were doing and were bracketing the CO’s vehicles, firing first ahead of them and then behind to try and calculate a bearing in the middle along which to fire. To this extent the QRF was lucky to be moving across the mortars’ range rather than towards or away from them, as lateral bracketing is far harder and based more on judgement, especially with a moving target. Had they been moving away from the mortar along a confined path, such as a valley flaw, then the bracketing comes down to trajectory alone which is simple maths.

If I was being cynical I’d say 100 personnel, 27 vehicles, a specially requested RCP, many hours waiting in the valley and taking the risks of an attack was a high price to pay for a ten minute conversation with three old men in a small village down an obscure valley used by the Taliban to smuggle weapons. But then from the other angle, how else can it be done? The other objective though was simply to let the Taliban know that they can’t move with impunity in the area. The CO told me there were at least two confirmed hits on the Taliban positions and he believed at least two KIA and probably many more wounded among the Taliban’s number.