Mimi Chakarova and her film The Price of Sex 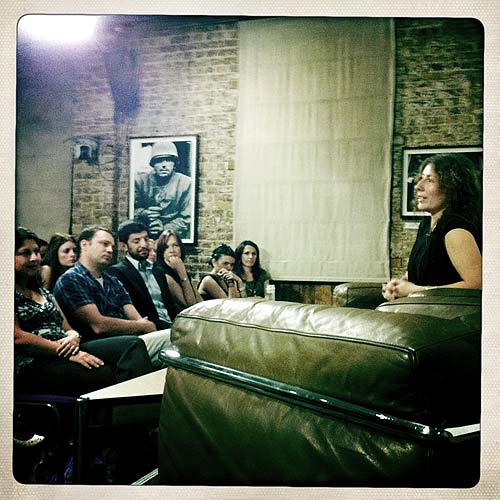 by Antje BormannPhotojournalist and filmmaker Mimi Chakarova introduced her film The Price of Sex about women sold into sex slavery with the plea to ‘stay with us’. She was keen, she said, to observe the audience’s reaction.
The film follows three women from Bulgaria and Moldova who managed to escape from the vicious trap they had naively walked into at a young age and were prepared to go on the record with their clearly painful and humiliating experiences. Three of a worldwide number of 1.5 million women traded for sex, according to UN estimates.
The film explores those young women’s origins. Post-communist Eastern Europe with its mainly rural existence, the young generation leaving for the West to follow the lure of better-paid jobs or even any jobs at all… some of them turning out to be false promises.
There was a look at the traders, some of them women effectively betraying their own (all three women in the film were initially lured abroad and sold by women).
There was a description of the conditions sex slaves are held in, without papers, blackmailed into submission, in squalid lodgings they must not leave, working off their ‘debt’ at a rate of up to 50 clients a day.
There was an attempt to talk to punters. The statements from some clients in Turkey who were prepared to go on camera were truly mind-boggling. Equally telling was the testimony of a former pimp, even more so his friends’ attempts to stop him talking.
There was also a look at law enforcement and NGO responses to human trafficking and its fall-out, both doing their best but seemingly fighting a losing battle. The probably most enraging revelation was that foreign funds Moldova receives to fight human trafficking don’t benefit the victims but effectively help maintain the country’s status as ‘Europe’s biggest exporter of women’.
The questions after the screening explored the perceived incompleteness of the film as it focussed on Eastern Europe as the origin of the traded women and their destinations when we are clearly dealing with a global phenomenon, which Chakarova said was intentional as the story was built around the three main characters.
Other contributions bemoaned the lack of a more thorough foray into the demand side of the equation, making the sex slave trade such a profitable proposition in the first place, and questioned what the film intended to achieve.
The reply to the final question, how legislation on prostitution might solve the problem, was typical of the entire discussion. Chakarova maintained that the film, a result of years of work on what was originally a photojournalistic project, was the best she could do. She never set out to answer all the questions and let the audience go home slightly shocked but in the comfortable knowledge that the issue was taken care of. She encourages her viewers to become involved, to care enough to find answers to their questions by themselves, and to act accordingly – to contribute their ‘Granito’, their grain of sand, to what has to be a collective effort, in reference to a previous film screening at the Frontline Club.
Find out more about the project on www.priceofsex.org.