“MDC is telling truth when it says it has won with a landslide.” 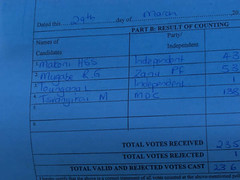 Since breakfast time we have been criss-crossing the city, looking at the results posted on each polling station wall and talking to people who have been getting results from elsewhere in calls and text messages sent by relatives.

It’s becoming clear that the MDC has won a landslide victory in Harare and indeed in many of the provinces.

It is rumoured that Robert Mugabe and his family have left the country for Malaysia.

At Belvedere School which had two polling stations, A and B, we spoke to a man who had just come from church. He said Moab’s cousin attends his church and confirmed the rumour to him. Hard to tell if this is true, but he was middle-class, well-educated, well-dressed and seemed plausible enough. 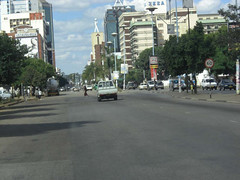 As we talked to the police guarding the polling tent, who were all affable but hungry (so my companion bought them some bread rolls) a truckload of young men went by, singing away… as they passed they put up their hands in the MDC open-palmed gesture, then putting thumbs up. The policemen smiled but didn’t respond.

We asked what they were hearing… is the city calm all over, how safe are we (as white women)? They smiled and reassured: “No my sister it is all calm, all peaceful, we are all Zimbabweans together, never fear.”

At the Marimba shopping centre it was a similar scene: people flocking up in ones, twos and groups to see for themselves the result of yesterday’s vote. All over the country people are doing the same thing and then passing on the news to their friends and family. Like the breeze stirring the long grass, the news is slowly passing from one area to another. Broad smiles, thumbs up, the open-palmed wave are everywhere.

“Oh madam, chinja at last”, says the driver in the car that pulls up next to us at the traffic lights. “What are you hearing?” everyone asks. We swap information: a text from an MDC worker in Bulawayo says there are reports of mayhem at the Zimbabwe election commission after clean sweep for the MDC-Tsvangirai faction in 5 or more districts.

Will has been up all night, collating incoming reports as MDC observers report back on the count results at each ward polling station. He texts: “Former Zanu strongholds like Bindura, Mutoko, UMP, Chivu, Goromonzi, Whedza, Rusape and Masvingo have changed hands.”

More rumours: the Zanu-PF MP of Bindura, Elliot Manyika, has lost his seat and shot someone. An MDC member named Sikhala has stabbed someone in Chitungwiza.

“It has never been like this in other elections I have known since 2000,” says Nik. It is so cool people acting like this, going out to check the results for themselves, completely without fear. It’s amazing.” 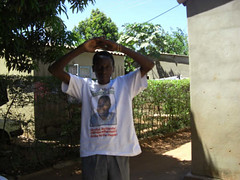 Along the road leading back towards the city centre all the Zanu-PF election posters pasted to the lampposts in the central reservation have been blotted out with yellow paint – the work of Simba Makoni supporters perhaps? His campaign colour was yellow, red for the MDC-Tsvangirai, green for Zanu-PF.

Makoni has been coming third everywhere we have seen, and everywhere we have heard of. But he has been taking votes from Mugabe and Zanu, that much is clear. Everywhere I go, on foot and by car, people are smiling, starting to dare to believe that maybe this time it really is going to work.

“Can we start to celebrate?” someone asks. “No, not yet, don’t provoke anything,” answers another. It appears the electoral commission warned against premature celebrations. There is quite incredible self-discipline. No triumphalism is betrayed, just nervous satisfaction.. nervous because they still have to wait for the ZEC official result announcement. Until then, nothing can be taken for granted.

Back in Chisipite, I encounter a self-professed Zanu-PF supporter reading the blue result announcements in disbelief. Tendai says he cannot believe that Mugabe has lost Zvimba: “it must surely be propaganda” he says. But what about here, does he believe this result is propaganda?

He speaks in rapid Shona to the police guarding the voting tent, on which the four blue sheets of paper tallying the count are attached.

“No, it is right. Here these were the votes, this is what was counted here, the police confirm it and to be honest I expected this area to be pro-MDC-Tsvangirai faction.”

Among the surprises so far, it appears independent MP Margaret Dongo has lost her Senate seat. A huge surprise is that Matabeleland, which was thought to be the heartland of MDC-Mutambara faction, has voted massively for Tsvangirai. The Mutambara faction is said to be in shock as some of their leading members have lost their seats. Only David Coltart, a white Senator, is said to have been re-elected safely.