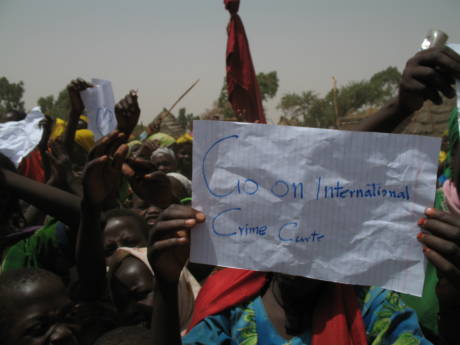 It’s business as usual, according to pretty much anyone you ask in Khartoum when the issue of next week’s International Criminal Court indictment of Omar al-Bashir comes up. No-one wants to give the Sudanese government an excuse to accuse diplomats or the international community of acting as judge and jury and finding Bashir. So the charade continues: Diplomats insist that the endless speculation about the judges’ desicion affects nothing. Travel to Darfur and things could not be more different.

Communications in Nyala, capital of South Darfur, are next to impossible. The mobile phone networks have been running at a fraction of normal capacity for the past few days – a sure sign that the government is either planning a big push or wants to underline its control of the region. Many NGOs rely on the mobile network for the internet too, so clusters of aid workers can be found anywhere with a satellite connection.

Charities, which are looking after millions of people living in camps, are preparing to batten down the hatches. No-one quite knows what to expect. Last time around (in July when the chief prosecutor Luis Moreno-Ocampo delivered his evidence to the ICC judges) there were a few small demonstrations. If anything, access to camps was easier than normal. But this time around no chances are being taken. Trips to the field are being cut back and food and water hoarded in case of an extended period of unrest.

It is easy to see why. Last weekend Salah Gosh, head of Sudan’s National Security and Intelligence Service and one of the key members of the regime’s engine room, won a promotion in rank and celebrated by warning the world that the ICC decision could have serious repercussions…

“We were Islamic extremists then became moderate and civilized believing in peace and life for everyone.

“However we will revert back to how we were if necessary. There is nothing any easier than that.”

There’s no doubt that the prosecution of Bashir is the way to find justice in Darfur. But the atmosphere in Nyala, hub for many of the agencies responsible for protecting and providing for the region’s displaced, suggests that it comes with a cost. The cost is the ability of aid workers to reach people in need. No-one yet knows how severe the repercussions will be. Salah Gosh’s statement is probably a testing of the water, rather than a real commitment. Everyone here – where lives are on the line – is taking it very seriously.