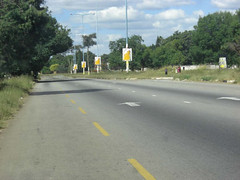 At 7am we went to check the results posted on the wall of the tent that served as the Chishawasha Junction polling station. Only 236 votes had been cast (they had expected 300, so 64 ballot papers were unused) and 138 of them were for Morgan Tsvangirai, against just 53 for Robert Mugabe and 43 for Simba Makoni. Langton Towungana got one vote.

It was the same margin of victory in the Senate, parliamentary and council elections, the Tsvangirai faction of the MDC romping home by a mile. People drifted up to check for themselves, singly and in groups, with broad smiles breaking out, thumbs up signs and the open hand wave that is a symbol of support for the MDC.

“This time we got him good,” said Andy. “I phoned relatives in Gweru and Kwekwe this morning and the MDC is still leading in both and I am thinking that we really got him this time.” 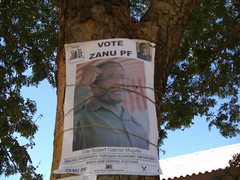 We drove around the almost rural back roads of this north-eastern suburb of Harare finding everywhere an atmosphere of hopeful anticipation. And at every stop we found yet another person who tried to go and vote on Saturday but was denied because their names had disappeared from the electoral roll.

Micky was one of them. “I went first to Newmarch Farm to vote but they couldn’t find my name, so I tried the other polling stations in my ward, but they didn’t have me listed either.”

Yet the African Union observer mission accredited to the ‘2008 Harmonised Election’ has discovered widespread evidence of ‘ghost voters’, including 8,450 voters registered to an empty field in north Harare.

Everyone I talk to comments on how there have been no police road blocks on any of the roads all weekend. Usually a drive from the suburbs downtown is interrupted several times as police check for contraband or cash.

“When Operation Sunrise was announced – that’s when they knocked three zeroes off the bank notes and we all had to surrender the old money – we were stopped regularly by police hoping to confiscate cash”, Julie told me. “It’s the same story with people coming in from the countryside with a sack of mealie they’ve grown that they’re hoping to sell in the city. The police would stop them and seize their stuff on a pretext. We started to believe that this was sanctioned from the top as a way of keeping lower-ranking police paid and fed.” 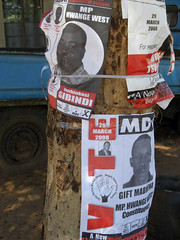 I had heard similar stories all through Matabeleland. Ross told me that in the markets it was the police chiefs who were selling grain and sugar.

“If someone else comes to sell their stuff, they take it from them, because only they can sell.”

I have also heard plenty of cautionary tales about police brutality, especially at the feared Harare Central station. Yet late on Saturday night, at the close of the polls when I went to see how things were at one of the northern polling stations, the policeman from Harare Central posted outside the tent was warm and friendly.
After the usual African reverse handshake, he talked about how orderly things had been throughout the day, that almost everyone had voted by mid-afternoon. At 7pm the chief polling officer gave a little speech to the assembled election officials, party observers, independent observers and a small group of South African journalists, to explain how things would proceed and with that the count began and we left them to it.
The MDC was already predicting it would win by a landslide nationwide. In an attempt to pre-empt fraud the MDC said it would collate results from each of the 9,400 polling stations and announce them itself.
President Mugabe, however said he would definitely win a sixth term and rejected the rigging claims, saying preposterously:

“We are not in the habit of rigging… We don’t rig elections. I cannot sleep with my conscience if I have rigged,” he said. 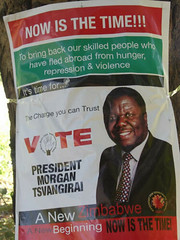 But with the latest figures showing inflation is running at 165,000% even in his own rural heartland, people are waking up to the reality of economic disaster and growing hardship and hunger.
This morning I went out to the local farms that have not been seized by ‘warvits’ (the so-called war veterans who were Zanu-PF’s shock troops in the land grab from 2000 on) to find that a single egg bought at cost price on the farm is 5 million Zimbabwe dollars (ZD).
Time now to go eat that egg before we set out to find out what we can about the results from elsewhere and gauge the mood on the streets.