Watch the even here.

By Marise Jeyarajah
The club hosted an animated discussion last night on the controversial issues surrounding the future of Kashmir. Chaired by author and broadcaster Victoria Schofield.

Kashmiri born Mirza Waheed, BBC Urdu journalist and author of The Collaborator, opened the event by giving his account of the ‘turning point’ events which took place last summer in the Kashmir Valley:

“We had this uprising, in the valley,where hundreds of thousands of young people came out to the streets protesting against the Indian rule […] at the end of it we had 119 young people dead. They were killed on the streets, I refer to that as they were murdered because  these were not militants, these were not armed insurgents […] they were young boys.”

Waheed expressed disappointment towards the response of the Indian government as he considered that they had not taken responsibility for the deaths of the young people. He went on to say:

“People want to be given a chance to decide their future. That right has been denied consistently and brutally.”

Imran Khan, correspondent for Al Jazeera English, spoke of the Pakistani government’s mentality towards the situation in Kashmir:

“Standard narrative from Pakistani’s that say they have done everything they can to try and get a solution to this coflict […] what Pakistani’s now feel is that the plebicite needs to happen. If you speak to the Ministry of Foreign Affairs they’ll say that there needs to be a referendum;  the Kashmiris themselves need to decide.”

A divide occured when, Times of India journalist Ashis Ray, went on to defend India’s administration of Kashmir.

“There were certain rumblings of resistance and there was certainly disaffection among a section of people in Indian controlled Jammu and Kashmir, but this was aided, abetted and fuelled by Pakistan. This is a fact of history.”

During the partition of former British India, the Maharaja of Jammu & Kashmir had to choose to join either Pakistan or India, reminds Schofield as she tries to bring perspective back into the discussions, a new section has arisen within the Kashmiri population that wants independence.
Lawrence Saez, Senior Lecturer in Comparative and International Politics at SOAS interjected arguing that the Kashmiri people need to better their ‘PR strategy’:

“They have done a catastrophic job of promoting their cause. When I look at Burma, when I look at Tibetans they have a figure head, a person that people can rally around […] The first thing they need is to realise what they need to do to obtain their objective, whatever it may be.”

Khan reiterated this point later in the discussion as he outlined the importance of raising international awareness of the situation in Kashmir.
Subash Chopra saw a solution through the relationship between India and Pakistan as he believed that a good relationship between these two countries could lead to a positive outcome for Kashmir.

“The common things which have survived, in spite of war in spite of battles, for instance the Indus Waters Treaty has survived 60 years, the LOC, line of control in Kashmir, that has survived for many years and over the last 20 years, India and Pakistan have been regularly and religiously exchanging information on nuclear issues.”

The discussions reflected the pessimism a lot of people feel when approaching this ‘intractable conflict.’ Despite their disagreements on how to resolve the conflict, there was agreement at least that the political dicussions had moved on since the outbreak of violence 1989 but that a definite solution was still not on the horizon. 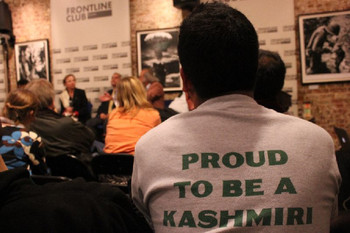