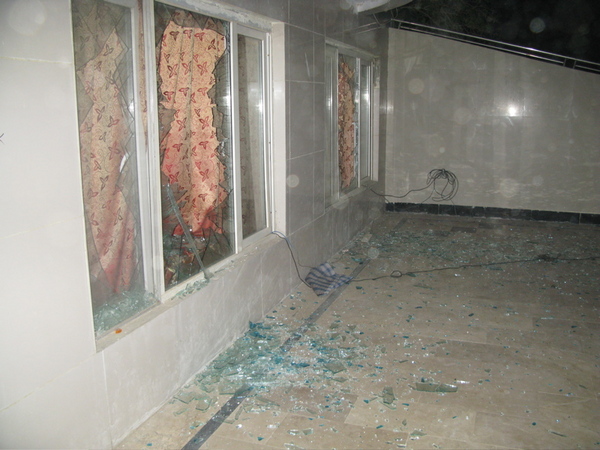 It was perhaps twenty minutes after the call to prayer had sounded and we were breaking the fast, sitting on the floor around a plastic sheet with plates of rice and meat, when I was knocked sideways to the ground.

It takes a split second till you realize what happened; the shock-wave had blown out the windows, sending the glass flying like shrapnel into the room.  It was a miracle that no one was injured.

Our glass is double glazing, and glass kept on raining down the facade landing on our terrace, shattering into thousands of tiny pieces.  There have been bomb blasts before that shook the ground, but nothing like this.  I heard gunfire on the streets for several minutes, and I moved to the back rooms of the apartment with my friends.  No pretty pictures this time, but I doubt I could have held the camera steady those first few minutes anyway.

Soon after the gunshots stopped, we walked out onto the terrace, glass crunching under our sandals and watched as police cars and ambulances rushed past towards the blast side.  The air was filled with dust and a few blocks down I could the flashing lights and cars gathering. Quite soon after, a fire burst out, with flames and black smoke billowing into the sky – firefighters passed by.

The blast site was near to Sharjah Bakery, a shop I visit most days for soda and sweets.  Just across the street is a wedding salon, and the NDS/intelligence services office is close by along with a private security company and a construction company.  A friend called and said it might have been a bomb factory that blew up.  Some 40 minutes later reports came in that it was a car bomb.  Casualties kept arriving at Mirwais hospital for hours after the explosion.  People were being dug out of the collapsed building.  This morning the toll had risen to 43 dead and 65 injured.

My desk is littered with pieces of plaster that have fallen off from the ceiling and the window frames sit next to the wall.

30 minutes after the blast a convoy of foreign troops drove by, the unmistakable sound of their heavy vehicles roaring through the streets, followed by more ambulances.

Smoke kept on rising into the sky hours later, even though the firefighters seemed to have managed to put out the fires.  Helicopters were flying overhead through the night sky.

Sitting in the now windowless living room last night talking with my Afghan friends, one turns to me and says: “There are those Afghans who migrated to the west who say they miss Afghanistan!”  He bursts out into laughter.  “This is what they are missing!”  Another shakes his head: “Fuck Kandahar.  Fuck Afghanistan.”

In the end we stayed.  The idea that a truck bomb would drive into our building and explode seemed unrealistic at the time.

Now the next morning, the air is filled with the sound of people cleaning up broken glass on the street.  The shopkeepers just opposite our building have all lost their glass windowfronts.  I can see the blast sight; some buildings are missing, and the ones adjacent to the center of the explosion seem derelict, without windows or frames, just the empty carcasses left standing.

The area around the Shah Jahan Restaurant is a popular area, with many people spending their evenings on the little green grass strip in the middle of the road.  Half an hour ago I drove to the blast site, and the destruction leaves little doubt that this has been Kandahar’s biggest bomb so far: entire buildings were annihilated and squares of mud huts flattened.

Sharjah Bakery is gone, the construction company reduced to a pile of bricks across the street from it.  The restaurant itself collapsed, burying everyone inside underneath it.
Another friend called in and said he believed that the district chief of Khakrez was at the restaurant along with a number of government officials, but nothing is confirmed yet.

Emotions were running high yesterday, and security forces in town were quick to pull the trigger.  Standing outside on the terrace waiting to being put through to CBC Radio for an interview, someone started firing his AK47, and a bullet whizzed past me, hitting the door and reaching as far as our living room.

A moment later CBC was on the phone:

“Tell us what is happening right now.”
“I’ve just been shot at…”

I did the interview anyway, even though I guess I must have been a little freaked out at the time, given the amount of swearwords I used.

In the end, though, no one is surprised.  This is not a turning point or the start of something; it’s what has been happening all along for the past few years in Kandahar.  Violence has been on the rise, and there is no security for the people of southern Afghanistan.

[This piece was written by Felix Kuehn.]