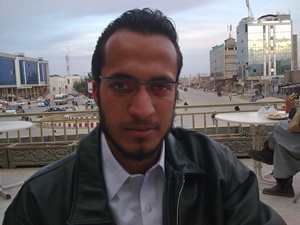 Javed Yazamy, a freelance camerman and fixer working in Kandahar in southern Afghanistan, was killed yesterday in a drive by shooting. He worked for Canadian news outlets mainly CTV News and went also went by the name of Javed Ahmed and the nickname of JoJo. The Committe to Protect Journalists sent out this statement,

"We send our condolences to Jawed Ahmad’s family and friends at this time of deep loss," said Bob Dietz, CPJ’s Asia program coordinator. "CPJ had come to know Jawed and his family well over the 11 months he was held in U.S. detention at Bagram Air Base without being charged by U.S. forces. We hope that his killing will not follow the pattern of other journalists’ deaths in Afghanistan in recent years and go unsolved." link