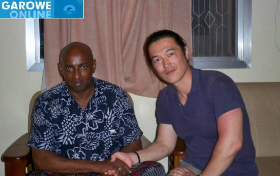 Given the utter chaos within Somalia, outright danger for journalists and the fact that freelancers Amanda Lindhout and Nigel Brennan remain hostages some 9 months after they were kidnapped outside Mogadishu, I was somewhat surprised to learn about Kenji Goto. He’s a journalist working for the "Independent Press" It appears he hooked up with a driver in Las Anod and travelled the 120km stretch of road to Garowe, arriving in the Puntland captial on Monday evening,

"I took a flight from Tokyo on Apr. 30 and spent a layover in Djibouti. I arrived in Berbera on Sunday," Kenji explained.

From Berbera, he hired a vehicle that transported him to Las Anod. Both towns are under the control of authorities in Somaliland, a peaceful region in northwestern Somalia that seeks complete independence from the rest of the country.

"Do you understand that this land [Puntland] has laws and security forces?" Planning Minister Dhala asked.

Kenji’s answer was as surprising as his trip: "Yes, Mr. Minister. But I wanted to go to the pirates place."  Apparently, Somaliland authorities had misinformed him that Puntland is the "pirates place…"

"…I want the people of Japan to know the truth about this [piracy]," Kenji told me. "The world is sending warships…but I believe the world should send medicines and food to Somalia." link