ISIS and damage limitation in the battle for Syria

Kim Sengupta, defence and diplomatic correspondent at The Independent said:

“There are more brigades, battalions that nominally at least will say that they belong to the FSA but as an organisation it is still very much based in Istanbul. It’s got probably more influence than before but not an awful lot on the ground.”

How did ISIS (Islamic State of Iraq and the Levant) rise to become one of the most prominent groups?

Aymenn Jawad Al-Tamimi is a student at Brasenose College, Oxford University focusing on developments in Syria and Iraq:

“On the ground what happened was that Jabhat al-Nusra people accepted [leader of ISIS Abu Bakr] al-Baghdadi’s argument [that al-Nusra was merely an extension of ISI and therefore should merge] and accordingly they switched over from Jabhat al-Nusra to declare themselves ISIS.”

Al-Tamimi explained the ideology of ISIS:

“Ultimately they [ISIS and al-Nusra] share the same ideological program. ISIS emphasises much more the goal of establishing a caliphate…Beginning in Iraq and Syria which then should not only encompass the entire Muslim world but the whole world, including London and such places… This globalist emphasis, which ISIS does, in contrast with al-Nusra, means that this appeals so much to foreign fighters.”

Raffaello Pantucci, senior research fellow at the Royal United Services Institute for Defence and Security Studies (RUSI) said that many foreign fighters are unaware of the complicated environment they are going into:

“One of the things that isn’t so clear to individuals that seem to be going out there to fight is I think they miss the point about how confusing a battle field this really is and how shifting it really is. And how these allegiances on the ground are changing almost daily.

But why ISIS and not other groups?

“…What’s worrying is that ISIS has a more globalist rhetoric… a lot of these people who are going out there are not going…because they want to become involved in terrorist activity and have any intention in coming back here to conduct some sort of terrorist attack… but what’s worrying is the groups they are joining and the people they will meet … may have different ideas and may be able to persuade them to have these different ideas.” 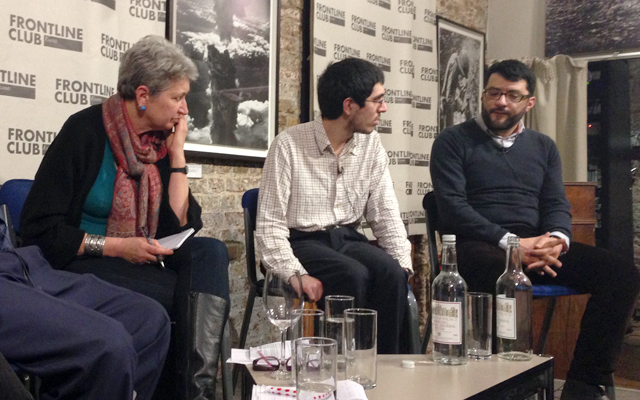 Malik Al-Abdeh, a British-Syrian freelance journalist based between London and Antakya, attempted to simplify the confusing environment:

“If you go to these places you realise that it’s all about money, it’s about local power brokers. How else do you explain why al-Nusra and ISIS don’t like each other? They’re two gangs that don’t get along.”

A question from the audience asked what should the west and other powers be doing?

“It’s all just become so fragmented now…I think that either you accept the idea of wanting a total victory and then you’ve got to have some kind of international force brought in in the aftermath, to train some kind of army to bring some kind of stability and that will take a very very long time…a timescale of decades…or are you going to go with a de facto partition of the country and some kind of ceasefire?”

Sengupta said that it is actually too late for the west to intervene; the time has passed:

“If you don’t want to support a population against a regime, don’t entice them to rise up which is what Britain and France, in particular did… have been doing consistently and then they have failed abjectly to support what was left of the so-called secular groups and moderate groups and thus we have seen the triumph of ISIS and other extremist groups.”

“I think that there was a moment where the west could actually do something to affect a difference, I think that moment has passed quite a long time ago and I don’t know if there is a huge amount that they could actually control about this situation anymore.

“…I think the one plan that they’ve got is how do we mitigate the threat that’s going to come back to us. And that’s why … the focus here is on the foreign fighters.. I don’t think there’s a plan for an end state of how we want it to look. I think they want to make it as less bad as possible.”

Watch and listen to the full discussion below: