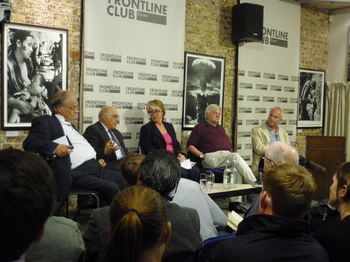 In the past few months a fresh wave of violence has swept through Iraq. The 23 July saw the worst of these attacks when a string of coordinated bombings and shootings in 15 cities across the country left over 100 people dead and many more injured.

But do these recent events really signal new depths of instability in a nation that has already suffered so much trauma in recent history? Is there a way through the maze of sectarian rivalries and power plays? And what, if any international intervention could take place to remedy the Iraqi predicament? The panel discussion on the 11 September saw four experts wrestle with these questions.

Much of the discussion focussed on precarious political situation, which is inevitably reflected in the wider community. Kamran Karadaghi, distinguished Kurdish Iraqi journalist emphasised the cyclical pattern of such violence, attributing this to underlying sectarian and therefore political fractures which have never completely healed. It is other interests, he said, that hold these factions in the balance, not true reconciliation:

“I felt that there never was real reconciliation among the different … political players.”

Senior Middle East correspondent for the Independent Patrick Cockburn, also pointed to the fragile sectarian situation within the political sphere:

“None of these people like each other, a lot of them hate each other, some have tried to kill each other, but a certain stability is there in the balance of power between them, and they all have quite a lot to lose if the present system collapses.”

During the debate the presence of oil also emerged as a key factor at play within the continuing unrest in Iraq. Putting aside sectarian conflict for a while, Professor Charles Tripp, explained how the focus on oil wealth creates a "kind of wary stability" within the government. Along with this elitism he argued, comes destabilising effects within the general populace. "If you create class privilege you create class resentment" he said, referring to the the lack of trust in state institutions.

Adding to this Tom Hardie-Forsyth spoke of his extensive military experience and criticized the inadequacy of Western intervention during the recent occupation:

“We did not have the boots on the ground to fulfil our obligations as an occupier to the civil population under the Geneva Conventions. Instead we left reconstruction and security to a bizarre alliance between private and public sector.”

Western mistakes he argued, contributed to the continuation of Mukhabarat state governance-mentality, which in turn has lead to the disenfranchisement of ordinary Iraqis.  Perhaps the most poignant question asked during the evening was whether the ‘signature of Saddam Hussain’ was still visible within Iraq. The panel agreed that Al-Maliki’s security orientated government would certainly imply so.

For reactions to the discussion including those of panelist Kamran Karadaghi, watch below:

You can watch the full debate here.