Intervening in Syria: Not Another Iraq or Afghanistan

Sinjab, however, emphasised the necessity of stepping in.  With conservative estimates that 80,000 people have been killed and two million have fled the country, she opined:

“The reality on the ground is pushing Syrians – they have no other options. They know the Americans are coming for their own interest, but there is no other way to stop the bleeding of Syrians on a daily basis.”

Only one of the four experts argued against intervention:  Jonathan Steele, a columnist at The Guardian and longtime foreign correspondent.

“It would be a disaster,” Steele said.  “We don’t know what the repercussions would be… In Iraq and Afghanistan, we were told it’d be short and quick and surgical and all the rest of it, and they turn out not to be.”

But Syrians today are in a different position than Iraqis or Afghans a decade ago, Steele’s co-panelists felt.  Shiraz Maher is an expert on terrorism and Islamic groups in the Middle East, and to him, a critical factor is how much Syrians want an intervention:

” I’m not saying it would be clean [or] perfect. . . . Yes, if the West intervenes, we will inevitably kill, indirectly, and unintentionally, some civilians. But if we stand back, [Assad’s] regime continues to do the same thing – every single day.”

Sinjab, Maher, and Scott Lucas all withered at the idea of limited bombing.  Lucas, a professor at Birmingham University and expert on U.S. and U.K. involvement in the Middle East, explained:

“The question [shouldn’t] be on bombing. It should be on a longer term question of support for the insurgency. . . . It is a myth that Al Qaeda groups are dominating the insurgency. It’s a question of arms supplies: do you provide anti-aircraft and anti-tank weaponry to the insurgents which negates the weapons that Assad continues to have to basically maintain dominance? Do you support a no-fly zone or a protected zone that took place in Libya in 2011, which allowed people to be protected, and the opposition therefore could move against Qaddafi?” 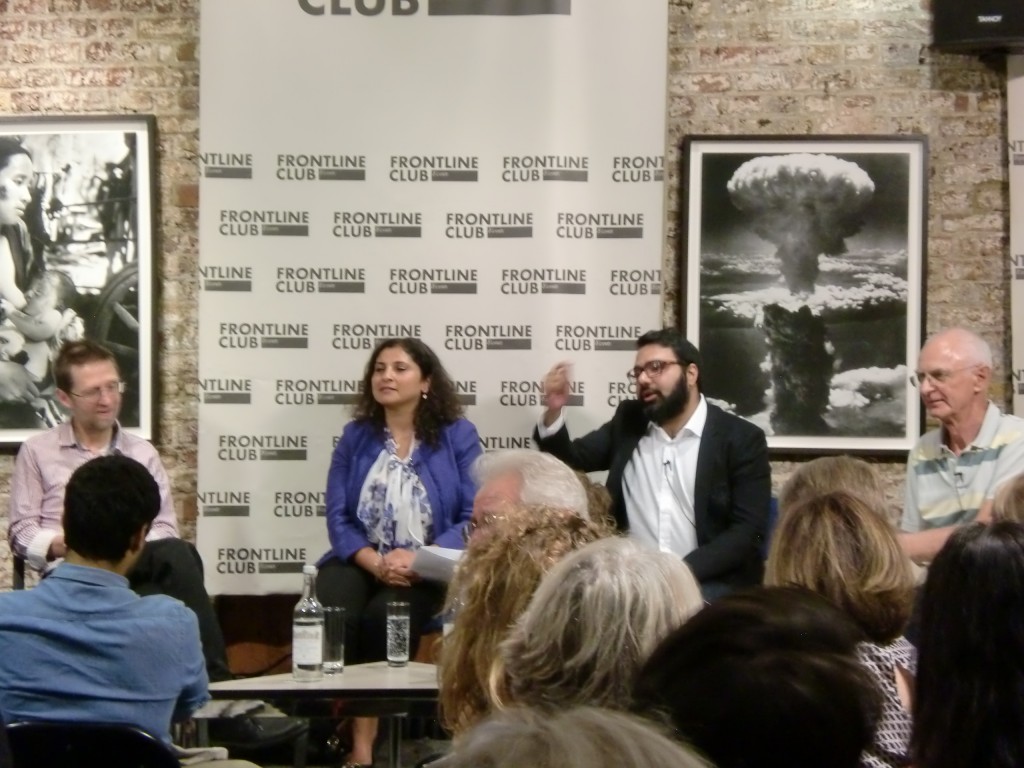 The greatest danger to Syrians, Sinjab, Maher, and Lucas feared, was an intervention too weak or misguided.

“For Assad, for the Syrian Ba’athists,” Maher said, “this struggle is an existential one…  They [will] kill whatever number it takes [to survive].”

To protect Syrians, they saw a need for much more than just “a shot across the bow,” as U.S. President Obama has imagined.  In Sinjab’s words, Syrians

“are very fearful of:  if the Americans only did a ‘shot across the bow,’ and it was [only] a limited target, then the Assad forceswould retaliate big time on the people.”