Interactive Storytelling – The Medium and the Message

Technological developments have influenced the way stories are crafted. The National Film Board of Canada (NFB) has been at the forefront of major developments in cinema since 1939, both creatively as well as technologically. Their projects are also true testaments to a filmmaker’s desire to transmit images and words in a meaningful and passionate way.

Today, with opportunities offered by new media, stories can be told in a non-linear fashion through different platforms, or made interactive. Do these new technologies truly revolutionise the way we document the world, or merely change the relationship between the maker and the viewer?

Award-winning executive producer and creative technologist of the NFB Digital Studio Loc Dao, will explore the possibilities these developments offer through some of NFB’s most innovative projects. He will go back to the start of interactive magazines and photo essays, which led to the interactive documentary and storyworlds. 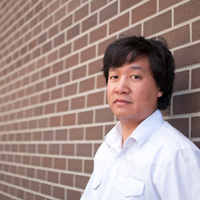 Loc Dao is co-founder of the groundbreaking NFB Digital and CBC Radio 3 studios and their industry shifting bodies of work. The combination of his experience in digital strategy, editorial, web development, content production and architecting large scale internet delivery systems, brings a rare multi-dimensional approach that pushes the boundaries of what can be done with story, form and platform. He has received over 60 awards most notably Digital Producer of the Year, nine Webby Awards, two New York Festivals Grand Prizes, three Online Journalism Awards, a Prix Italia, the FWA Site of the Year 2012 and a Cannes Cyber Lion.

Loc Dao will also be speaking at the Power to the Pixel Conference on Tuesday 7 October.

This event is in partnership with the Canadian High Commission.