On Thursday 2 July, Hyeonseo Lee joined an audience at the Frontline Club for a discussion on her experiences as a North Korean defector. Lee, an international campaigner for North Korean human rights and refugee issues, was joined in conversation by author Paul French. 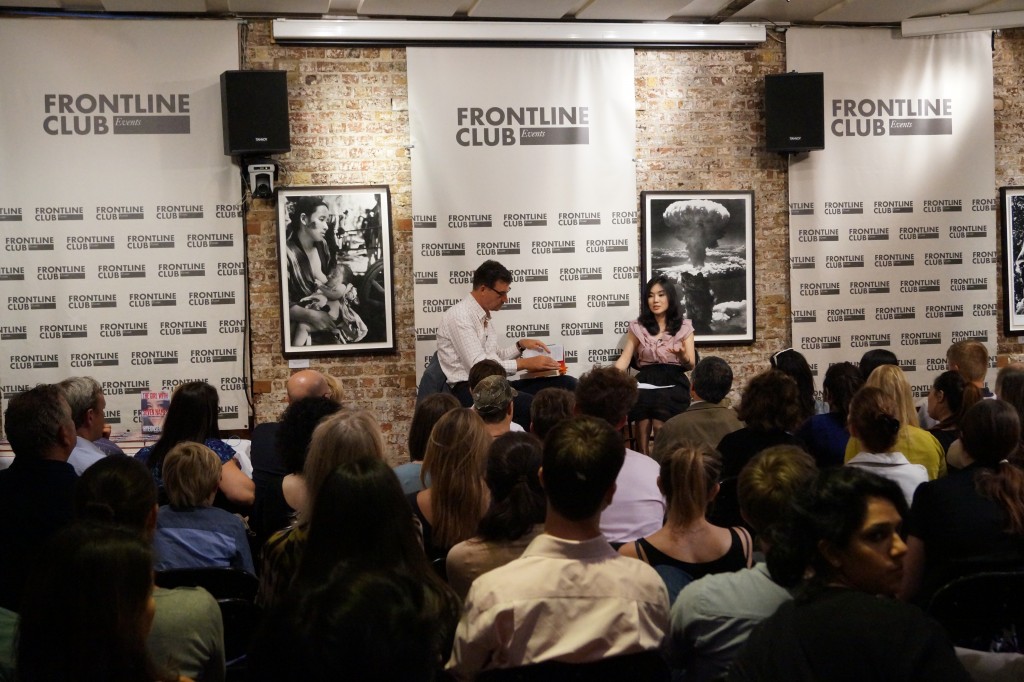 One day after dinner, seventeen-year-old Lee told her parents that she was going to visit a neighbour. “Make sure you’re home before dark,” her mother said at the door. She promised not to be back late and turned to leave her house forever.

The young Lee headed for the neon lights of China that had long beckoned her from across the border. Here she discovered the inevitable loneliness of life as a fugitive, constantly terrified of being uncovered and drifting from her sense of self with every false name she adopted.

“I had to change my name constantly to protect my identity, so I became the girl with seven names,” she said at the start of the talk.

Lee went on to explain that whilst in China she was haunted by the guilt of having deceived her family and was filled with regret for the past: “I realised that I hadn’t cooked for them or given them a gift, but when I realised that it was too late. It made me so guilty that since then I never celebrate my birthday as a punishment to myself.”

French, an analyst and commentator on Asia, invited Lee to elaborate on points she had mentioned in her memoir The Girl with Seven Names.

He asked about the recurrent theme of superstition, which punctuates much of the book: “Your mother takes you several times to see a fortune teller to try and work out everything from whether or not this boy will be a good marriage or bad marriage, to if you’re going to leave the country what day should you go on.”

French said he was interested in understanding the role of superstition in an atheistic, communist regime.

Lee responded: “People have nothing to rely on so they really, severely rely on the fortune teller,” she laughed. “I even went to see a fortune teller a few months ago.”

As a young girl, a fortune teller predicted that Lee would escape from North Korea, stating, “you will eat the foreign country rice.” Yet even then she only imagined that she would live in a different area of the country – never abroad. She said that the reason North Korea is a “collapsed country” is because Kim Jong-Il believed his own fortune teller too much.

The conversation moved onto the perceived supremacy of the Kim dynasty. Lee admitted that she always believed the leaders to be Gods: “We didn’t consider them as normal human beings” she said. “Until I was fourteen, I thought Kim Il-sung and Kim Jong-il don’t go to the bathroom and that they killed the enemies when they were five or six years old.”

She expressed amazement at her previous naivety, but defended her beliefs and those still held by her compatriots: “From the moment you are born you are brainwashed severely, even though it’s all a lie, if you hear it every day, every minute, it becomes the truth.”

When Kim Jong-il died, everyone knew that they had to cry or risk dangerous consequences, and “many people really cried with their hearts.” Yet some citizens were sent to prison camps for crying too little, and others for crying too much and appearing insincere.

As well as growing up to a drumbeat of propaganda asserting the Kim family’s godly status, Lee also learned from an early age not to trust anyone. Her mother used to tell her that ‘the walls have ears and the fields have eyes,’ and politics was very rarely spoken about at home.

“Even husband and wife can’t trust each other,” she said.

Her mother was spied on for six years by someone she considered to be her best friend. One day, sick with guilt, the woman spy admitted that she had been reporting to the government on all her actions. Lee said that this kind of betrayal was “everyone’s experience in North Korea.”

Spying and duplicity extended beyond the borders of her country and into China, where new ‘friends’ reported her to the police as a North Korean defector. Lee was forced to lie to her roommate in Shanghai, who years later texted her saying, “I didn’t know you were a defector – I just saw your Ted Talk!”

Lee now lives in Seoul with her mother and brother, whom she helped escape North Korea thirteen years after her own flight. She is married to an American man called Brian.

“My mum was the most brainwashed woman. When I introduced my boyfriend to her she really treated him as an ‘American bastard’. In North Korea, we didn’t learn that Americans were human beings, we just had one word: American-bastards.”

Growing up in North Korea, she was taught that all men from the US had long noses and dressed in military clothes, while the British were always portrayed as gentlemen in tall black hats and capes. Relieved, she said that her mother now accepts the “American-bastard” as a son.

Click here for more information on The Girl with Seven Names: A North Korean Defector’s Story.

This site uses Akismet to reduce spam. Learn how your comment data is processed.