In the Picture: Urban refugees with Andrew McConnell 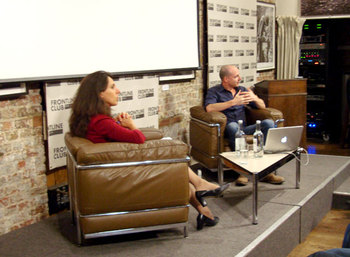 Taken over the last four months, in seven cities and four continents, with the help of the International Rescue Committee (IRC), McConnell photographed and produced short films about individual refugees in cities such as Nairobi, Bangkok, Kuala Lumpur, Jordan, Port-au-Prince and New York.

Dr Sara Pantuliano, a political scientist and Head of the Humanitarian Policy Group at the Overseas Development Institute (ODI) introduced McConnell and he wasted no time in getting to his motivations behind the project:

"The whole reason for this project is this new phenomenon, that refugees no longer flee to camps, that the old stereotypes don’t really fit anymore.  Over half the world’s refugees live in cities. And so what I hope to achieve with the work is to challenge those stereotypes and hopefully present a new way of viewing refugees in the modern world."

Pantuliano asked whether McConnell had any expectations about what he would find when starting the project:

"There were no huge surprises, I found what I suspected I would find. People living in terrible conditions, in very small cramped places, one family in one room … the same things repeated themselves; the same fears, fear of detention, the authorities, afraid to go outside."

The element of fear was not the only similarity that McConnell found between the people he met:

"They had an incredible resilience, they’ve suffered things that you and I can only imagine. That will to survive was there in each and every one of them – they weren’t giving up."

McConnell relayed the stories of the people in his photographs from a lady who had escaped with her family to Burundi from Congo where she had been kidnapped and raped by FDLR or Mai-Mai forces; to Syrians who had fled over the southern border into Jordan after conditions in Homs became unbearable.

He then took the audience through how he tried to convey these people’s stories through his images:

"The whole series was photographed at night time and what I’m really trying to do is give a sense really, how forgotten these people in cities are … They don’t understand what rights they have and so they’re afraid to go outside, they suffer discrimination, it’s hard to find employment and so they often find themselves hidden away."

"We were really here trying to give a sense of the isolation these people feel, coming to a foreign city like this and trying to some how survive."

McConnell has big plans for the project – there will be an exhibition in St Pancras Station in January and after that he hopes to take it to Brussels and New York.

Listen to Andrew McConnell on his photographs:

listen to ‘Andrew McConnell on his photographs (Frontline Club – September 24, 2012)’ on Audioboo

Listen to Andrew McConnell on why refugees choose cities instead of camps:

listen to ‘Andrew McConnell on why refugees choose cities instead of camps (Frontline Club – September 24, 2012)’ on Audioboo