Journalists accompanying Germany’s Foreign Minister, Guido Westerwelle, on his trip to Pakistan and Afghanistan this week had a few surprises.

To keep to schedule, Plan B was to pile everyone into three hastily rented mini buses and drive to Islamabad. Germany’s public broadcaster ARD had a playful take on the beginning of the trip – you’ll get the picture. 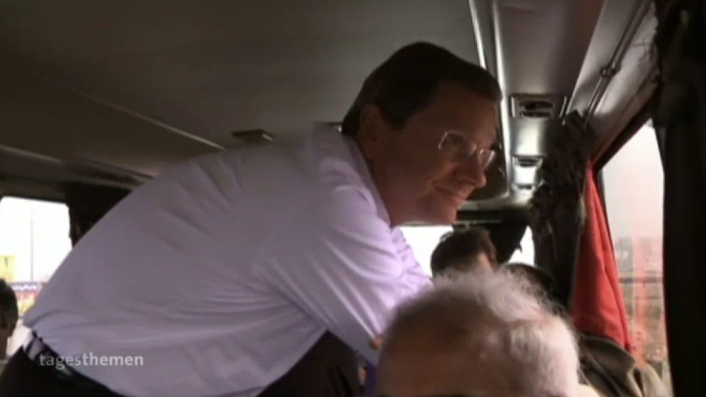 The Süddeutsche Zeitung described the scene outside a roadside Kentucky Fried Chicken where Westerwelle spoke to journalists about the unscheduled road trip.

‘The journalists wanted to know, how he felt about a cross-country trip through Pakistan on a decrepit bus?

Mr Westerwelle briefly acknowledged the unexpected opportunity to "see something of the countryside".

The German foreign minister’s mantra is Pakistan is the key to helping Afghanistan. Though Mr Qureshi’s call for Germany to loosen its controls on exporting weapons to Pakistan might be pushing cooperation on security and fighting terrorism too far.

The next leg of the trip to Afghanistan included talks with President Hamid Karzai and an unannounced visit to German troops serving in Kunduz. For the media this also meant taking a close inspection of Westerwelle’s wardrobe. Germans are by now quite familiar with the image of Defence Minister, Karl-Theodor zu Guttenberg, visiting troops dressed in relaxed, yet ready for action quasi-military garb – usually khaki cargo trousers and a Bundeswehr t-shirt offset by black body armour.

Zu Guttenberg by the way also spent some time in the military and from appearances knows how to dress up or dress down in the field – for that matter so does Frau zu Guttenberg. So, how would Herr Westerwelle dress for a base visit?

Bild, always known for its close attention to fashion details (and unfortunate wardrobe malfunctions of female celebrities) sketched Westerwelle’s ‘Outdoor-Look’ for its readers as:

‘street shoes, a black suit, a white shirt and a purple tie and a bullet proof vest!’ 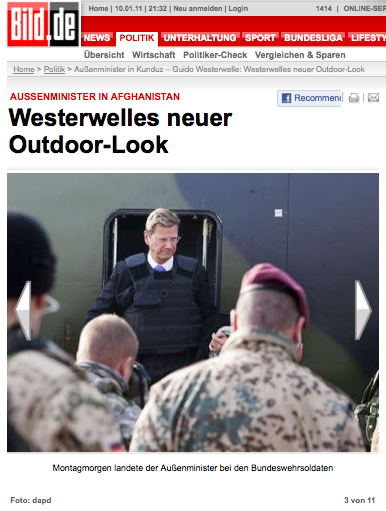 Mr Westerwelle obviously brought a dress sense projecting statecraft to Kunduz, and it could be argued was more appropriately attired than Germany’s international development minister and FDP colleague, Dirk Niebel, who enjoys wearing his old army paratrooper hat when on tour.

Mr Westerwelle’s small talk rapport with troops and the semantics of the word war were also noted. He avoided referring to Afghanistan as a war, though conceded "that it’s understandable that soldiers feel it is a war."

Germany plans to start reducing the number of troops deployed in Afghanistan by the end of 2011 – and complete its withdrawal in 2014. At the moment there are about 5000 German troops in Afghanistan. Mr Westerwelle said Germany will continue to support and stand by Afghanistan but did not say exactly how.

The German parliament is due to debate the army’s mission in Afghanistan later this month. It has to both approve extending the mission and at the same time consider the Government’s plan for withdrawing and handing over responsibilities to Afghan forces.

That means we’re going to hear a lot more about the year 2014. The opposition Social Democrats (SPD) are tying their support of extending the mission to a 2014 pull out.

Politically, the Pakistan trip and Afghanistan troop visit offered Westerwelle a chance to step back into perhaps his now preferred shoes of an international statesman, as well as try to gain some much needed traction on the home front. It’s hardly been a Merry Christmas or Happy New Year for the FDP leader. Leading figures in the Free Democrats have openly questioned Westerwelle’s leadership. Polls show support for the FDP has slumped from a 2009 election high of around 15 % to just 5 %. Not exactly great numbers for the FDP nor for their senior governing CDU/CSU coalition parters, especially in a year full of state elections. If the less than enthusiastic media reaction to his most recent party speech is anything to go by, Mr Westerwelle might need more of that ‘Outdoor-Look’ during campaigns to win back support.