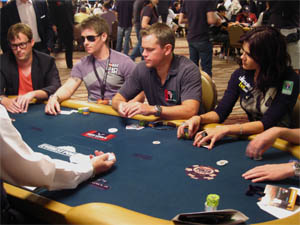 I’m generally in favour of celebrities getting involved in awareness raising campaigns for Africa’s miserable assortment of wars. And, while destroying children’s toys for Darfur appeared to show a slight misunderstanding of the nature of kids’ playthings in this part of the world, I wasn’t going to get too pedantic about cultural disconnects and so on. But even I was a little nonplussed by "Ante Up for Africa", essentially playing poker for the poor people of Darfur.

Celebrity poker players turned out in full force yesterday for the 3rd annual Ante Up for Africa, a charity tournament co-hosted by world poker champ Annie Duke and actor Don Cheadle.  Matt Damon, Ben Affleck, Charles Barkley, Sarah Silverman, Jason Alexander, and Mike Tyson were just a few of the poker aficionados who took to the red carpet to talk about the importance of supporting humanitarian relief efforts in Sudan.

Now I’m not a leading authority on Islam, but I think after travelling through Sudan and Somalia I know a thing or two about the central tenets of the religion. Is gambling really the best way to raise cash for Sudan? What next, a sponsored hot dog eating competition? A drinkathon? There are plenty of celebrities who have spent time there or in Chad and really get the place (I’m thinking of Mia Farrow). But this just makes people like Matt Damon and Ben Affleck look a little silly.