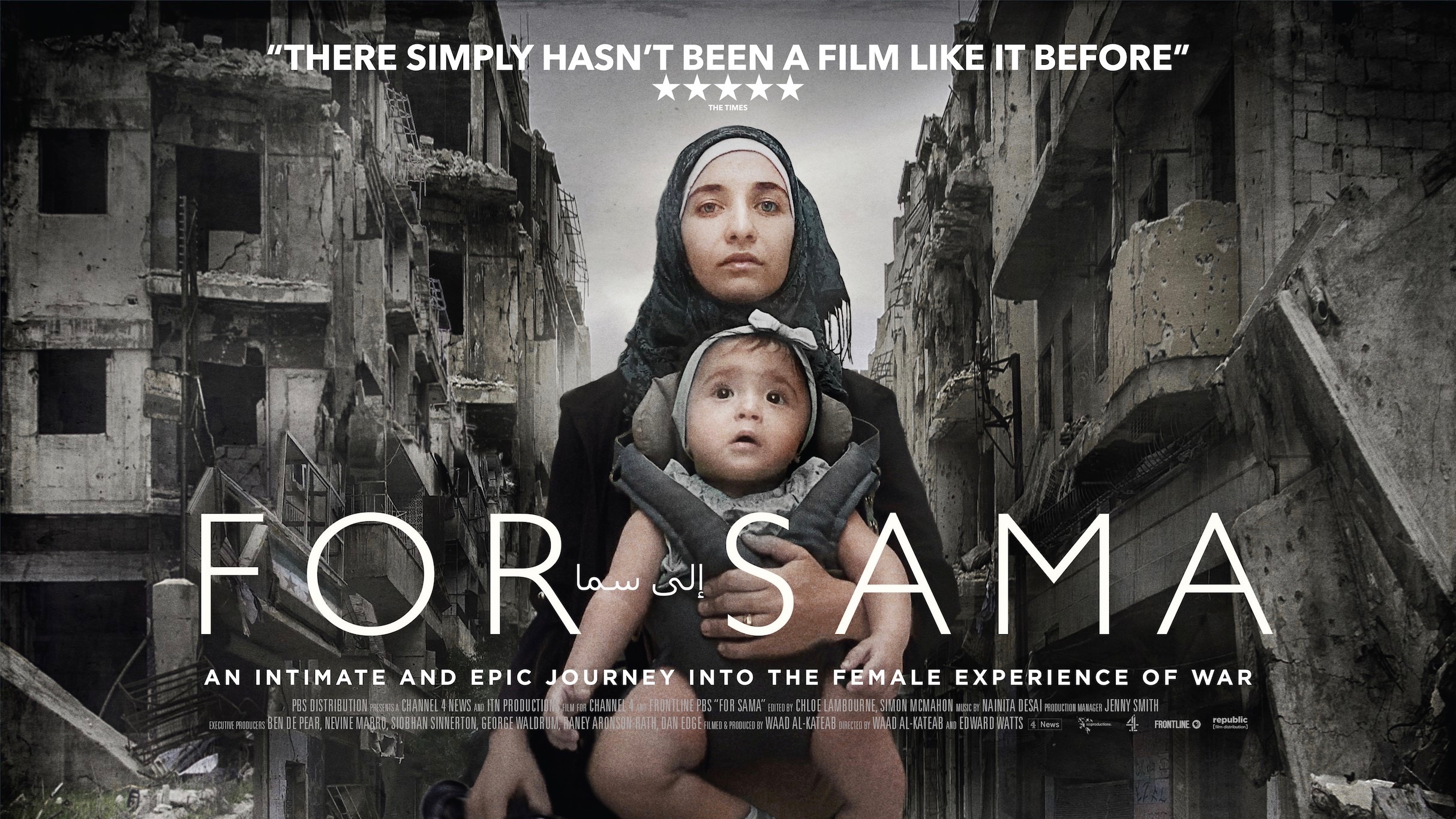 Join us for a special screening of acclaimed feature documentary FOR SAMA with filmmakers Waad Al-Kateab and Edward Watts.

For Sama (97′) is an intimate and epic journey into the female experience of war. Told as a love letter from a young Syrian mother to her daughter, it tells the story of filmmaker Waad al-Kateab’s life through five years of the uprising in Aleppo, as she falls in love, gets married and gives birth to her daughter Sama, all while cataclysmic conflict rises around her.

Waad’s camera captures incredible stories of loss, laughter and survival as she wrestles with an impossible choice – whether or not to flee the city to protect her daughter’s life, when leaving means abandoning the struggle for freedom for which she has already sacrificed so much.

A favourite of critics, audiences and film festivals, For Sama has already won 23 awards, including the Golden Eye at Cannes Film Festival 2019, the Audience Award at Sheffield Doc Fest 2019 and the Grand Jury Prize at SXSW.

The film will be followed by a conversation and Q&A with filmmakers Waad Al-Kateab and Edward Watts, and Executive Producer Nevine Mabro.

Waad al-Kateab (Director). In January 2016, Waad al-Kateab started documenting the horrors of Aleppo for Channel 4 News in a series of devastating films titled Inside Aleppo. These reports and others became the most watched pieces on the UK news programme and received almost half a billion views online and 24 awards including the 2016 International Emmy for breaking news coverage. Waad was a marketing student in Aleppo when protests against the Assad regime swept the country in 2011. She taught herself how to film and started recording the human suffering around her as Assad forces battled rebels for control of Aleppo. She stayed through the siege documenting the loss of life and producing some of the most memorable images of the six-year conflict. When she and her family were evacuated from Aleppo in December 2016 she managed to get all her footage out. Waad lives in London with her husband Hamza and two daughters.

Edward Watts (Director) is an Emmy award-winning, BAFTA nominated filmmaker who has directed over twenty narrative and documentary films that tell true stories of courage, heroism and humour from across the world, covering everything from war crimes in the Congo to the colourful lives of residents in the favelas of Rio de Janeiro. His 2015 film Escape from ISIS exposed the brutal treatment of the estimated 4 million women living under the rule of the Islamic State and, for the first time on television, told the extraordinary story of an underground network trying to save those it can.  His first narrative short film Oksijan told the incredible true story of a 7- year-old Afghan boy’s fight to survive as he is smuggled to the UK in a refrigerated lorry and the air inside begins to run out. It premiered at the BFI London Film Festival in October 2017 and has since played at prestigious film festivals around the world.

Nevine Mabro (Executive Producer) is Deputy Editor of Channel 4 News. She has led the programme’s agenda- setting foreign output, enhancing its ability to get extraordinary coverage out of some of the world’s most dangerous places. She finds and nurtures new talent both on screen and off, and works with many independent filmmakers. She executive-produced Waad al-Kateab’s award- winning Inside Aleppo coverage for Channel 4 News in 2016 as well as Marcel Mettelsiefen’s Agony in Aleppo short film that won the 2013 Emmy and was developed into the Oscar- nominated film Watani.