I’ve got quite a bit of travel coming up over the next few months and these five gadgets have become must haves in my kit bag. Do let me know if you’ve got any essential travel gadgets that you don’t leave home without. 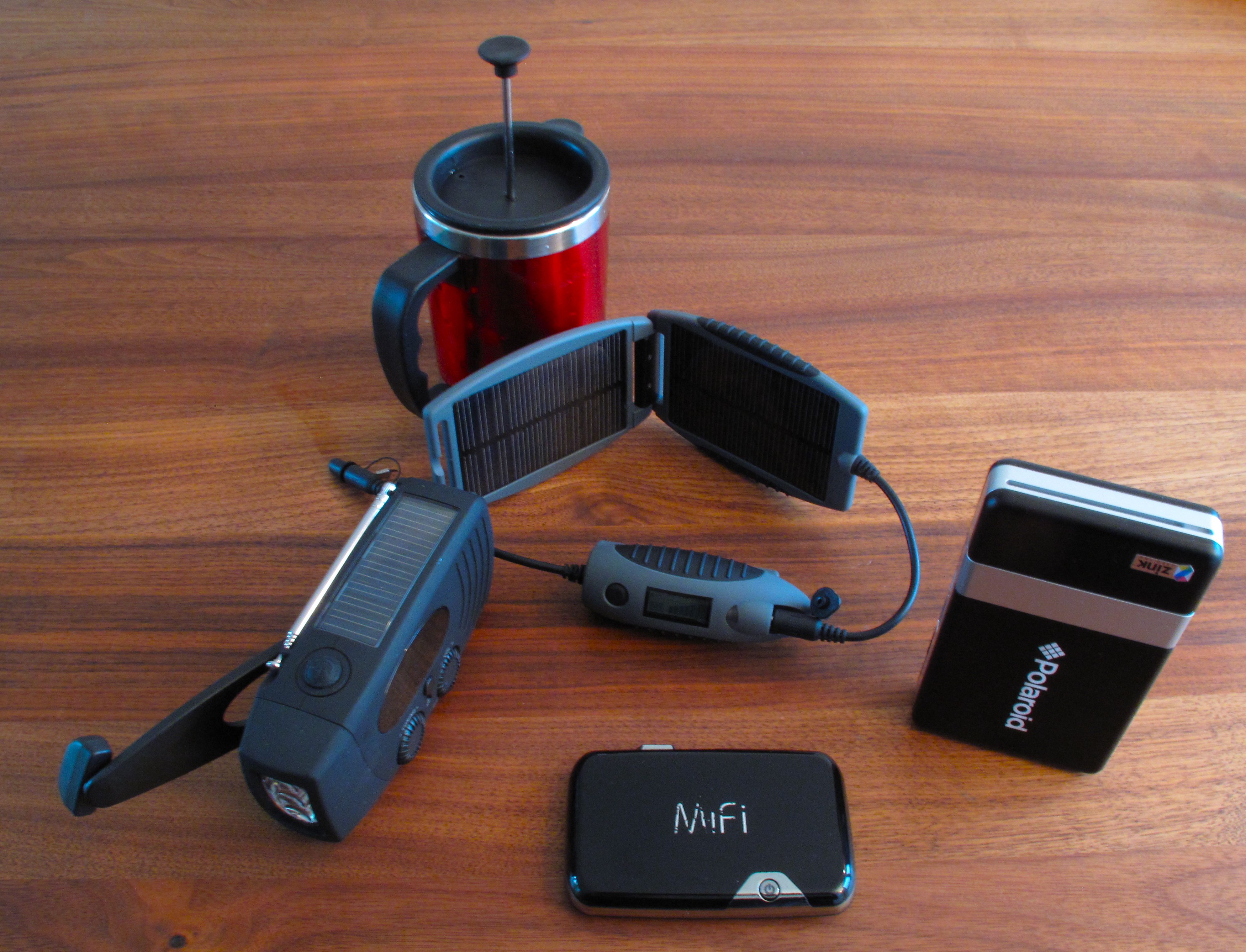 Stick in a SIM card to access a 3G network and start surfing the net via wifi. This little wonder lets you connect up to 5 devices by wifi. I gave the Mifi 2352 a good workout earlier this year in Iraqi Kurdistan using the Mobitel 3G network. It won a lot of praise my co-producers wanting to get online quickly. It turned literally anywhere we were into an instant internet cafe. Recharge on the run. Christian Payne aka @documentally has a good review of the PowerMonkey on his BushTech blog. It’s a practical device for recharging small devices. I often carry the battery pack to give my iPhone or Nokia a boost. The array of included adaptors makes this gadget quite versatile. Anyone using a Kodak pocket video camera such as a Zi8 might be interested to know that the battery pack will charge the camera battery (slowly) or work as an external power source. I have yet to test how long you can film using the PM on a full charge. As for the solar panels, I’m going to Mali shortly for a filming assignment so I’m keen to use the solar panels to help keep some small gadgets charged up.

I love radio. I usually take quite a bulky Sony short-wave radio on my travels. But if I want to travel lighter and I know the BBC World Service is available locally on AM or FM then I usually opt for a small Walkman transistor set. But a couple of months ago a small all-in-one radio caught my attention. For 12 euro I thought it was worth giving a go and either it would do what it says on the tin or I’d give it away. No regrets. It’s quite rugged and is staying in the kit bag for the time being – perhaps a one-year after test would be useful to see how it holds up. The AM/FM radio works fine with loudspeaker or headphones. The LED torch is reasonably bright and fine for flapping around during power cuts (though I still carry a mini Maglite). The solar panel charges both the radio and torch. And as for the most interesting part of the unit – the wind-up crank handle – well I’m happy to report that it’s not a gimmick. After a couple of quick revolutions it begins charging not only the torch and radio, but via a short cable, just about anything accepting a 5 volt DC charge. Think mobile phone, iPhone and even a Mifi. Ok, it’s going to be an emergency situation that you need to charge your phone by a crank handle, but you never know… The one I bought in Germany was under the brand Moorhead. But I’ve noticed the same/similar model is sold under other brands elsewhere. It comes with several small adaptors for charging. I have a little bag for these adaptors (they’re all mixed up with the similar PowerMonkey adaptors) but I wish there was a little cubby hole in the unit to store the cable and the adaptor I would use the most. The unit can also be charged up by a USB port connected to a computer or another battery source.

The crowd pleaser. In combination with a mobile phone or digital camera via USB, the Polaroid Pogo is a pocket-sized photo printer. It really makes a difference if you’re working in a visual medium to be able to offer someone a photo on the spot – about the size of a business card. Result? Smiles all round. I used to cart around a small Canon printer that plugged into a car ciggie-lighter, but the Pogo is much more portable, powered by a rechargeable battery and there’s no mucking around with ink. However, keep in mind you can’t directly print with the iPhone – Apple has crippled the iPhone’s bluetooth for sending photo files. Nokia, no problem. It’s a pity really as it would be brilliant to use some iPhone photo editing apps such as PS Mobile in tandem with the Pogo. OK, perhaps the title of this post should of read four gadgets and one life saving utensil… but good coffee is technical. When an espresso machine is not within coo-ee, I’m certainly up for any local brew whether it’s a Turkish coffee, a glass of mint tea or chay with the teaspoon standing upright in a small mountain of sugar. But, I get irritable if I have to stare at a tin of instant coffee and consider the words freeze-dried. So if coffee is likely to be a problem on a trip I bring my own coffee and a portable plunger. Probably the best 10 euro I’ve spent on travel kit. The one pictured below is from Jack Wolfskin and it does the job for two cups. I’d like to find a slightly larger one for three cups – a "crew" model, then everyone is happy 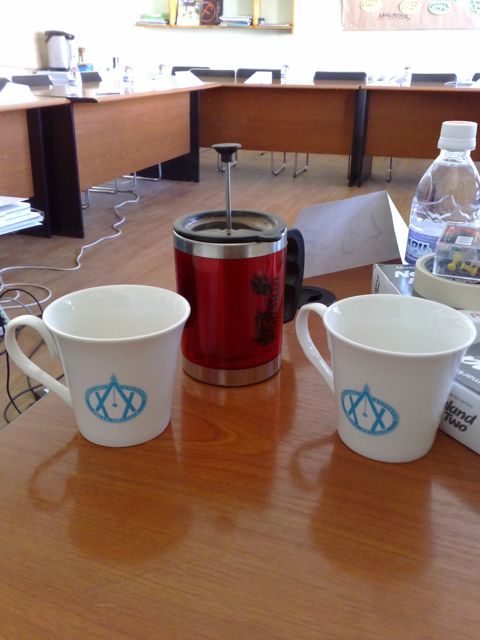 Coffee breaks at the Press Institute of Mongolia improved dramatically!