With over 15,000 articles published to its name, The New York Review of Books has notably set a stage for intellectuals to express their often conflicting views, whether they be orientated by politics, human rights, science or the arts. During the film, key critical events and movements covered by the paper, such as the Vietnam War or the Arab uprisings, were juxtaposed with insight into The New York Review of Books’ own history. Founded by Bob Silvers and late Barbara Epstein in 1963, the initiative arose out of what Silvers describes as “a sequence of coincidences”. One such coincidence was the New York newspaper strike of 1962 which created a publishing vacuum. Silvers says in the film of his paper’s intentions:

“It is not seeking to be part of an establishment but examine the truthfulness and the workings of the existing establishment whether political or cultural.”

Since Epstein’s death in 2006, Silvers has held the fort and is presented as a key character around whom much of the film revolves. Many scenes show Silvers at his desk surrounded by an overwhelming number of books. This is a man who, despite his old age, has an impressive amount of energy dedicated to ideas and, perhaps most importantly, to the freedom to express those ideas. One contributor affirmed in the film:

“Writers are inhibited by editors but that never happens with Bob.”

Another praised Silvers for his input, “That’s what you want as a writer to have an editor who knows more than you.”

At times the documentary seemed to overflow with beautifully interlaced interviews, anecdotes and archive footage of poets such as Robert Lowell, political philosophers such as Noam Chomsky, authors like James Baldwin, activists like Mary McCarthy, classicist like Mary Beard and the list goes on. Norman Mailer versus Gore Vidal and Bernard Lewis versus Edward Said are only a few of the intellectual clashes touched upon during the film and played out in the paper’s pages.

Despite the very high brow nature of the characters featured in The New York Review of Books, the film humanised these individuals and emphasises the subjective nature of their arguments. During the Q&A, Wall reflected on the what he called the various contributors’ vulnerability which he felt presented a side of the intellectual world which is rarely seen. Importantly, throughout the film, each historical insight was contextualised within an endless cycle of knowledge and power. Zoe Heller, the British writer and New York Review of Books contributor, said of the paper: “I have to admit, its been part of my education.”

No doubt it has also been part of some of the audience’s education. One member asked Wall how the editing decisions came about, to which he answered:

“Scorsese’s heart is in the cutting room . . . it is the holy grail for him.” He continued,  “They have had a method of editing which carries you through on a sea of ideas so effectively that there was little any of us could add.” 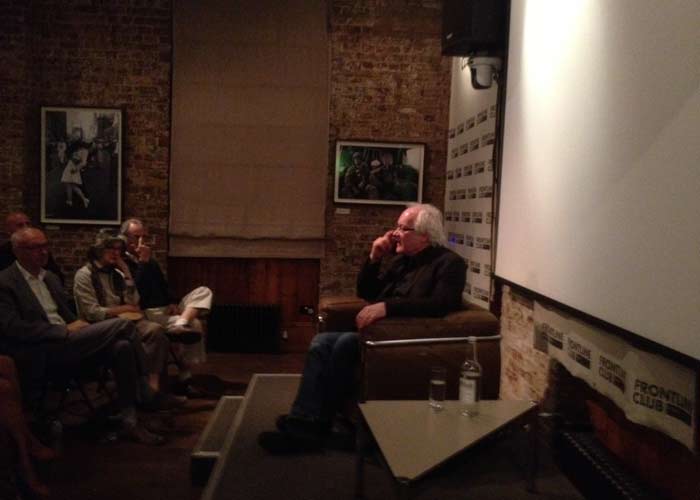 The 50 Year Argument pays homage to the great print media industry at a time when it is being forced to adapt and digitise. Like the The New York Review of Books, this film intends to inform and re-inform its audience. The following sentence from the film’s introduction seems to summarise this well:

“Our only truth is narrative truth, the stories that we tell each other and ourselves.”

Silvers’ position as editor seemed deeply entrenched in the fibres of the paper, provoking questions as to who could possibly take his place. The film ends, as it begins, with scenes from the Occupy Wall Street demonstrations from October 2011. The violent repercussions of this and other citizen-led peaceful protests around the world are still being unraveled today. Indeed humanitarian issues were not shied away from in this film nor human nature in its many forms. As Wall concluded:

The 50 Year Argument aired on BBC Four on Sunday 29 June at 9:00 PM and is now available to watch until Sunday 6 July here.