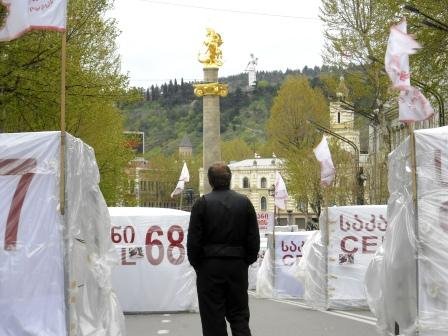 Last week was another remarkable few days of chaos, intrigue and unresolved mystery in Georgia. An alleged uprising at a military base the day before prestigious NATO exercises were due to begin; arrests of alleged coup plotters; late-night clashes between protesters and policemen at police headquarters; the continued opposition blockade of several main streets in the centre of the capital… as Paul Rimple notes on his Tbilisi Blues blog, what’s abnormal in most countries is everyday reality here.

Saturday marked a month since the non-stop protests began, and the opposition held one of its biggest rallies for weeks – intended to send out a message that although they are now negotiating with the authorities, they aren’t about to back down. “No one believed we would still be here after a month,” declared one opposition leader, who went on to insist that the government had “stopped functioning” and that President Mikheil Saakashvili was “on his way out”. But although government sessions are currently being held in Tbilisi hotels and provincial overnment offices because parliament is permanently under blockade, there is absolutely no sign that Saakashvili will step down, as the opposition is demanding.

At the rally, some opposition leaders and activists wore bandages and plasters, indicating that they were wounded during the clashes with police last week. The most dramatic moment came when one opposition leader with his head swathed in bandages was theatrically helped to the microphone by one of his comrades. He was welcomed as a hero – but even though the protest had a real sense of energy and enthusiasm for a change, a mere 20,000 people on the streets will not exactly shake the foundations of the Saakashvili regime. In other words, the political stand-off here is not over yet.