The first question from an audience member was on how Butts succeeded in gaining such impressive and unfettered access to a world that was reluctant to welcome journalists, and feared misrepresentation by the media.

“First off, I said that I was making a big documentary about the creation of the country, so that kind of appealed to people’s egos,” said Butts, adding that being a documentary filmmaker awarded him a more privileged identity than that of a reporter.

He built trust with the key figures in his documentary by finding common ground.

“I was actually sort of saying, ‘I’m kind of with you on this class war thing’,” Butts said. “‘I’m fed up of oligarchs as well taking over London’… so I was able to speak about what we had in common.”

The film provided a snapshot of a unique period of time. Carroll, who was talking to the Frontline Club audience via Skype from Donetsk, remembered the conflicting atmospheres.

“[Watching the film] brought a lot of memories back from that very strange time in the city,” he said. “Despite, as you saw in the film, the immense violence and tension that was happening there, there was also a sort of weird carnival element to it all.”

The rebels had a high level of support in the region, Carroll explained.

“A lot of people genuinely support the idea of this Luhansk, Donetsk People’s Republic, and in a sort of anti-Kiev, self-identity, self-fulfilment type of way. And I think that’s increasing,” he said.

Those who did not feel pulled by the prospects of self-determination, Carroll said, were pushed “for right or wrong” by the belief that Ukraine was shelling their cities.

“The understanding is that it’s the Ukrainians firing, and in understanding that they’re firing on us, well you know, we can’t be part of this Ukrainian system anymore.”

The Euromaidan protests held similar goals to those initial aims of the Donetsk People’s Republic. “The same economic problems were in Odesssa, in Western Ukraine, in many other regions which hadn’t been heard by the government in 25 years,” said Gumenyuk.

However, the region was already relatively politically disenfranchised in Kiev before the events in Euromaidan and, as Carroll explained, Russia seized the opportunity to exploit this existing divide.

“Kiev played its hand very badly,” he said. “It needed to be a lot more unpredictable than it was. But at the same time it was falling into traps, but the traps were being placed there for it.”

“I have actually great sympathy to the people portrayed in this movie,” said Gumenyuk. “They were speaking against the oligarchs, while we definitely knew that, for instance, these same rallies were funded by the same oligarchs.”

The film also commented on the influence of Russian state television on the protests, yet Lutsevych told the audience of other ways that propaganda made its way across the border.

On one visit to Ukraine, her translator told Lutsevych that Russian DJs touring Eastern Ukraine were warning their audiences of threats of fascism from Kiev. “They’re coming with their popular concerts and trying to say these kinds of things to people,” she said.

Lutsevych spoke out about the “dangerous” way in which Russia was “manipulating millions of people” into the current conflict, citing evidence that the Kremlin had plans to stoke a rebellion even before Euromaidan started.

“Yes, Russia is being a baddie,” said Butts. “[But] from their point of view they’ve good geopolitical reasons to do so… it’s like the Monroe Doctrine for the Americans, it’s just the way [they believe] the world works. The question is how do we combat it?” 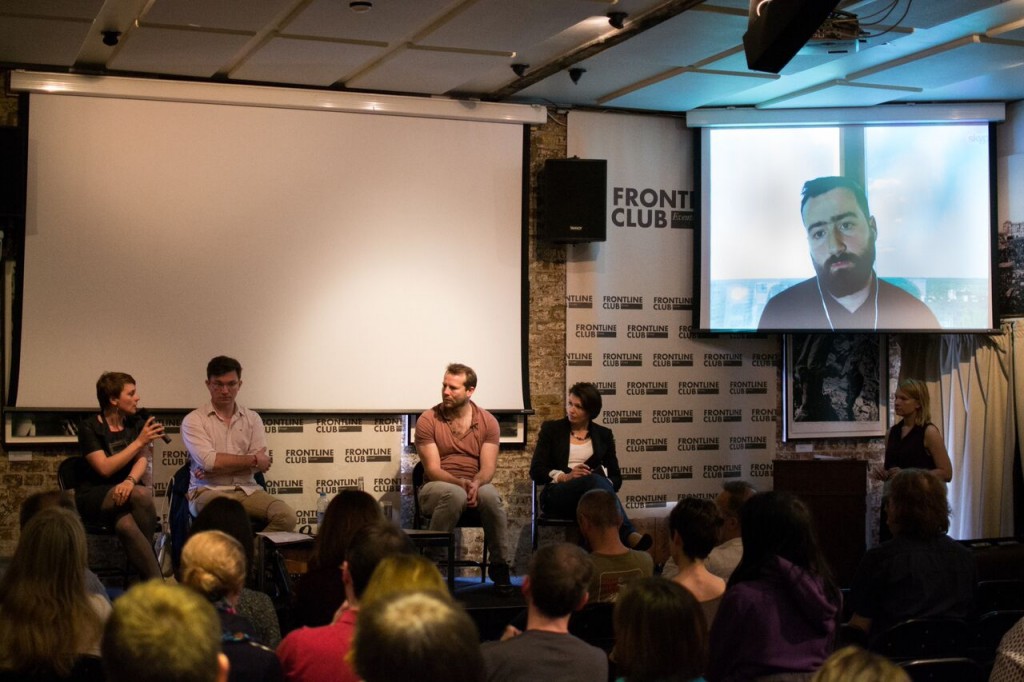 “There was a moment when the [rebel’s revolution] would have burnt itself out… I think that that war could have been prevented because Russia, as I said, is using every trick in its book. But it takes two to tango. The people [in Donetsk] were reacting to something.”

“If Ukrainian TV hadn’t demonised [the rebels],” said Butts, “… if they had laid off them a bit and sort of said, ‘we hear you guys, ok? You’re protesting in your strange way, we’re with you’… There would have been less anger on the ground.”

However, other members of the panel put the cause of conflict squarely down to Russian intervention in the country.

“In the movie, ethnic issues didn’t come up a single time,” said Lutsevych, “which was quite interesting. They didn’t say, ‘they will come here and make us speak Ukrainian and they will kill all our Soviet heroes’… it was more ideological.”

Importantly for Lutsevych, there was no existing internal conflict or civil war within Ukraine before Russia began to intervene. “I think this is even more scary when you think how easily you can create these artificial divisions,” she said.

On Saturday 16 May, the Frontline Club held a special screening of shorts and clips reflecting on the Euromaidan movement in Ukraine as part of the two-day Documenting Ukraine festival.

The short films – extracts from the longer work Euromaidan. Rough Cut – trace the efforts of a group of Ukrainian filmmakers who documenting several months of civil unrest, beginning in Autumn 2013 and culminating in the resignation of President Yanukovych in February 2014.

The resulting clips form a mosaic of images and moments which, put together, allow a powerful insight into life on the Maidan barricades.

The screening began with the short film Lenin’s Teeth, in which activists tear down a statue of Lenin during Maidan protests in Kiev in December 2013.

Then followed filmmaker Roman Bondarchuk‘s short Search for a Leader, showing discussions between activists as they attempt to self-organise which trapped in a police cordon on a bitterly cold winter’s night.

All Things Ablaze followed, which documents the violent struggles between police and activists in the weeks preceding Yanukovych’s resignation, in which flames, gunshots, molotov cocktails and bloodshed are regular features.

The following discussion with filmmakers and academics touched upon the challenges faced by the filmmakers, as well as their motivations in documenting the Maidan protests.

Filmmaker Roman Bondarchuk presented his reasoning: “For me, the biggest challenge was to film or to throw stones. I realised that filming was more useful.”