Open City Docs and the Frontline Club present Documenting Ukraine: Two Days of Cinema and Debate — special events and discussions exploring the realities of modern Ukraine and the depth of Ukrainian cinema — on Saturday 16 and Sunday 17 May 2015 at the Frontline Club.

Day passes are available for £14, as well as full weekend passes for £22. Booking through this page reserves you a ticket for Saturday’s events.

12:00 UK Premiere – Ukraine: When the Countdown Began (90’)
A complex and comprehensively sourced documentary about the emergence of an independent Ukraine from the ruins of the USSR in 1991 with interviews with all the major players including Leonid Kravchuk, Zbigniew Brzezinski, Gennadiy Burbulis, Levko Lukyanenko & James Baker. 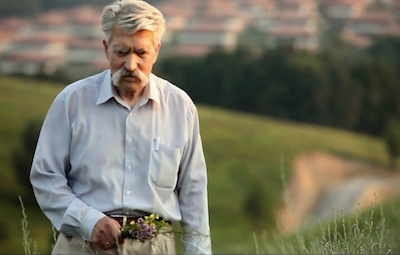 Sometimes the borders of political events come so close to the borders of your own creative freedom that you have no other choice but to participate. That’s what happened to Oleg Sentsov, who was arrested by the Russian Federal Security Service on suspicion of plotting terrorist acts and could now face 20 years in jail. Sentsov’s debut film Gámer premiered in 2011 to critical acclaim, but his second feature was put on hold when protests broke out in Ukraine. Sentsov supported the Euromaidan movement in Kiev and participated in the rallies against Russian occupation in Crimea. Despite protests against his arrest, international condemnation and a campaign by filmmakers Pedro Almodovar, Wim Wenders, Mike Leigh, Krzysztof Zanussi, Andrzej Wajda and Bela Tarr, the Russian authorities have refused to consider his release. 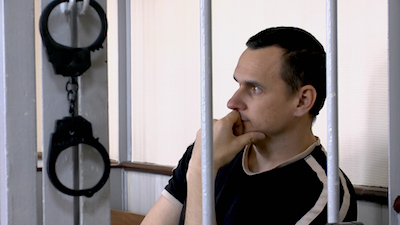 15:00 Double-bill: Tomorrow is a Holiday (26’) & UK PREMIERE of Mum Died on Saturday in the Kitchen (52’) + Q&A exploring Ukrainian cinema since 1986 with Raisa Sidenova, Serhiy Bukovsky, and Maxym Vasyanovych
Serhiy Bukovsky’s subversive 1987 documentary about a Soviet factory, followed by Maxym Vasyanovych’s tender portrait of his family in the Ukrainian SSR.

17:45-19:30 Maidan Shorts (26’) + Discussion
A special screening of shorts and clips reflecting on the Euromaidan movement in Ukraine, followed by a discussion with filmmakers and academics. For the discussion we will be joined by Roman Bondarchuk, Natalia Gumenyuk, Serhiy Buchovsky, Rory Finnin & Olesya Khromeychuk 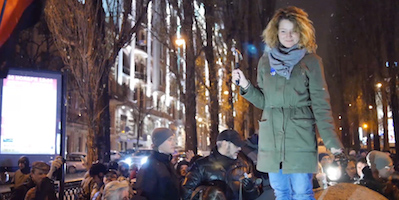 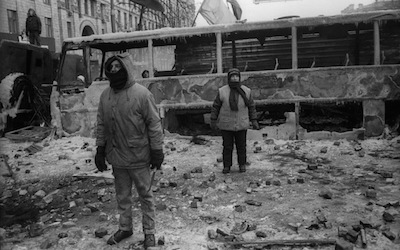 Glyadyelov still takes pictures the old way, in black-and-white on an analog cameras with manual focus, a mechanical shutter system and no burst mode. It seems as if these details are strictly technical, but this makes his work conceptually different from the stream of images we see every day. It is almost impossible to film like that in the middle of a fight. That is why the cameraman has to scan what is going on during pauses. In other words, he films not death, but life. Then he develops his films and makes photographic prints manually; that takes time. You cannot shoot news broadcasts this way – that’s why the cameraman has to gaze at non-transitory things.

One of my friends who has been visiting the war zone as a journalist all this time called the trees split by artillery shells the scariest things of the war. This picture tells me a hundred times more about shell attacks than burning Grad warheads or even destroyed houses (which are eventually seen on TV). 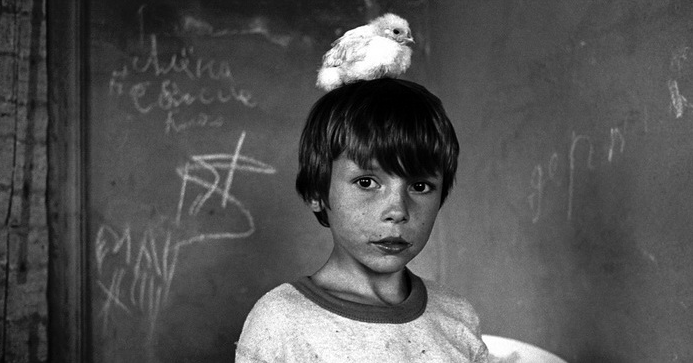 Gazing into the faces of the people hiding from a shell attack or peacefully napping soldiers I see the same broken trees. Many of those people are already gone. But the anxiety and hope from their eyes spreads through these pictures like the force wave from an explosion, meeting practically no resistance.

In a recent interview Glyadyelov himself said: “We are unfortunately too accustomed to statistical reports: The day before yesterday 3 people were killed and 7 injured. Well, I give another way of looking. When you know people directly, you can’t forget what is really going on. The sharpness cones back. And yes, when I’m there, I try to photograph the people because then you will not forget what is happening.”