From war traumas to an unusual Tibetan celebration, the second film took us to Adam Ruszkowski’s Amdo After Harvest. This documented a disjointed practice of dance, worship, head-scraping rituals and drinking. The colourful dream-like scenes were muted in sound and colour saturation. An agitated and piercing staccatoed string orchestra served as a narration throughout. The sense of chaos created by the music was purposefully overwhelming and disorientating. For a community evidently undergoing cultural changes the film conveys the dichotomy between reality, illusion, suffering and joy effectively.

The audience was also made conscious of the editing of sound and image in the eery film Cathedrals, directed by Konrad Kästner. The opening scene fixes on sky-scrapper apartment blocks, lifeless and looming ominously overhead. This is the ghost-like city of Ordos, in the Chinese province of inner Mongolia. Built to house two million people, it remains empty. Posters promoting its investment potential line the outskirts as a sacrifice to the property vultures and a testimony to greed at any cost. A prophetic voiceover narrates in German a story by Michael Ende. The poetic words juxtaposed with the hollowness of the city created a powerful warning. Together with the title Cathedrals, the narrative affirmed that the empty buildings signify places of worship: the worship of money. 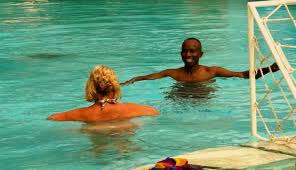 Beach Boy directed by Emil Langballe offered a welcomed light-hearted portrayal of Juma in Kenya and his dreams of a better life, personified by his relationship with a middle-aged, white, British tourist, with whom he begins a dubious relationship. The audience were made to laugh on numerous occasions throughout as Langballe candidly portrays the characters and their basic needs with a satirical undertone. One scene shows Juma gossiping with his male friends about sleeping with older white women for expensive gifts in return. His friend pipes up admiringly: “Its like fucking the dollar.” The awkward infatuation of a better life at the cost of Juma’s family, his girlfriend and his home offers a fascinating insight into a contemporary African phenomenon.

Tying back into the theme of sound, the film Insein Rhythm, directed by Soe Moe Aung, recreated a sound-scape surrounding a Yangon railway station. Together, the pounding of the ticket stamping, the clapping and levering of the tracks, the fluttering wings of a pigeon trapped inside and the ringing of red telephones created a bold rhythm. These culminated in a climax as the film drew to an end and the train reached the station. Insein Rhythm uses and amplifies sounds present in the scenes portrayed. Amusing to watch, the sound and image is edited, as the name suggests, in perfect unison.

The final film of the evening, VHS vs Communism, directed by Ilinca Calugareanu, brought to light the mysterious identity of a Romanian woman behind the dubbing of thousands of foreign film illegally distributed on VHS tapes in Romania during the communist 1980s. Her voice is recalled by the film viewers who are interviewed for the documentary. Their light-hearted recollections of the fictitious horror, romance and action films brought smiles to many faces in the audience. The contrast, and thus the threat, that these films represented to communist Romania added to the suspense that lead to the unveiling of the infamous dubber: Irina Margareta Nistor. Fascinatingly Irina explains her motivation in bringing these films to the masses and her satisfaction in undermining government censorship in doing so. The film left the audience with a sense of the power of film in countering mainstream political ideologies.