Connecting film with debate: Between the Lines launch event

Trailers for some of the films that will be included in the festival were presented to the attendees at the launch. The trailer for Last Call at the Oasis quoted Albert Einstein in saying: “Those who have the privilege to know have the duty to act.” A number of films made this their motto, raising the issue of campaigning documentaries, and the changing contract with the viewer. The festival will explore and widen the boundaries of investigative journalism, governmental censorship and new media, accompanied by a team of expert panelists.

One of the clips presented to the audience was Tim Pool’s political coverage: in a 21-hour marathon, the ‘hacktivist’ live-streamed from the Occupy Wall Street movement. Pool made it into TIME’s “140 Best Twitter Feeds of 2012 and showed the utmost significance of embedding social media when it comes to accurate reporting. Pool will be speaking at the festival alongside a cast of other innovators and experts on documentary and the media. 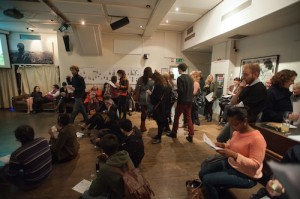 The audience at the Between the Lines launch.
Photography: Mark Shenley

The launch event was marked by authentic first cinematic impressions and discussions of the audience’s own encounters with filmmaking, and raising important issues for the general public through it.

Dennis Marks, a producer and filmmaker from the audience, remembered his most exciting film project.

“My team has been right there on Millennium Eve when Russia turned into a different world between 1999 and 2001, when Yeltsin handed over to Putin. It’s when the world changes right in front of your eyes.”

Drinks were sponsored throughout the evening by Chivas Regal. Between the Lines will be held from 1st to 3rd March 2013 at RichMix in Shoreditch, London.

Early bird passes are available for £100 (£80 concessions), more information can be obtained here.