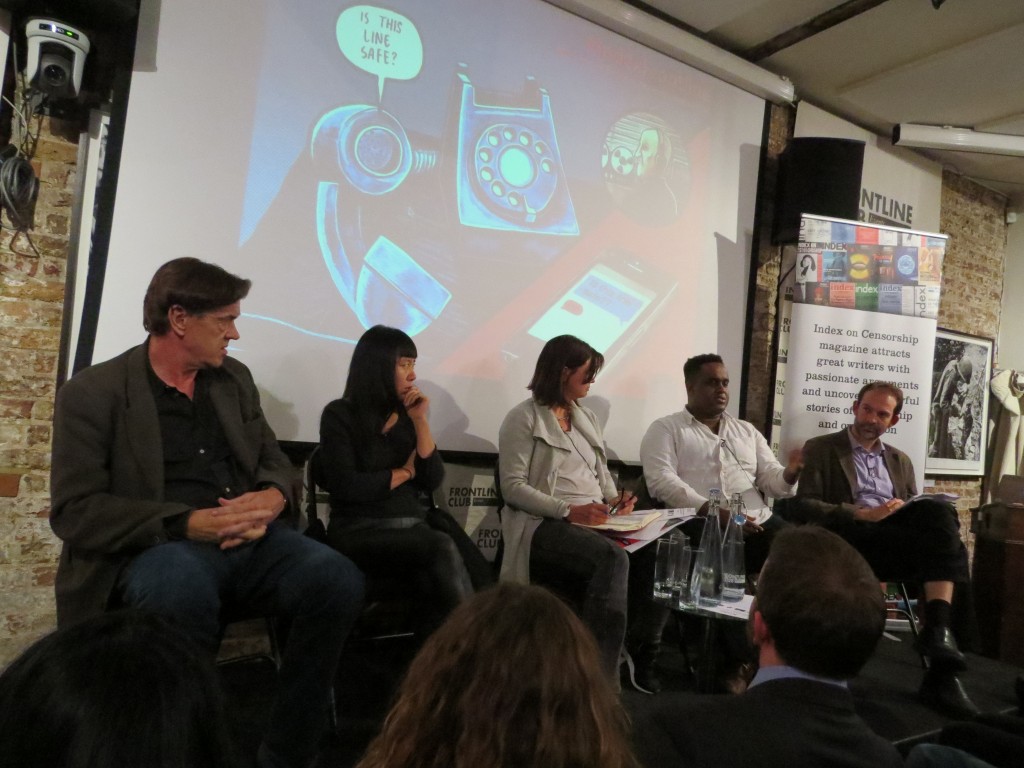 The distinguished panel included award-winning British investigative journalist and author Stephen Grey, whose recent book The New Spymasters looks at spying in the digital age and how it has evolved since the Cold War; Xialou Guo, fiction writer, filmmaker, political activist, and an outspoken critic of communist oppression in China; associate editor of the Observer Robert McCrum; and freelance journalist and associate editor at Warscapes Ismail Einashe. Index on Censorship magazine editor Rachael Jolley chaired the event.

Grey introduced the event: “It’s quite chilling to know the amount of information that can be unearthed about you [due to the internet], and not just about you but also your friends and family.”

He then questioned whether or not censorship was ever justifiable. “We want to stand up for freedom of expression but some censorship does seem logical. We want to stop our children from being taken into gangs or lured off to Syria.”

Robert McCrum responded to a question about censorship during the Cold War and in the present day: “The difference is that in those days it was simple, you knew who the enemy was and you knew what the enemy did. The big change now is this extraordinary explosion of global consciousness.

The discussion moved onto the question of the internet and the impact it has had on freedom of expression and censorship.

Guo said: “The internet has great advantages because it de-centralises the power. There’s no one boss in the internet world – there are many controllers.”

Guo then commented on the strict internet controls enforced in her home country, China. “There are currently at least 2 million internet police there – cyber control in China is vast.”

Einashe responded to an audience question on whether censorship has seen an increase in recent years. “I feel that in different East African countries that I know about that censorship has certainly increased, states are able to censor much more.”

He continued: “The link between social movements and online activity is really important too because you can’t really affect social change solely on the web – you have to connect to social movements too.”