Can illustration offer another layer to war reportage?

First, Butler explained what is special about illustration:

“Drawing offers the viewer, the audience, a different perspective. It encapsulates the passing of time in one image, those two or three hours, say, on the street just observing quietly in the corner . . . are invaluable. . . . I didn’t want to go to Aleppo to compete with the photographers, who do a fantastic job capturing the frontline for the front page, . . . I wanted to offer a different angle, a more human fourth dimension . . . to capture a period of time and then distil it into one image.

“ . . . Things move, people come and go, and you pick something that you like to draw and perhaps it’s a figure and they then walk off and come back and they’re in a different position. . . . Sometimes that means highlighting one thing. . . . If there’s a particularly interesting character why shouldn’t he be closer to the foreground? And if there’s something that’s not very interesting . . . I draw it smaller and at the back. It’s a very personal thing; if anyone else was to do it they would probably pick different things.”

Do you think people react differently to an illustrator than to a photographer who just shoots a photo and leaves?

“I see it as a very open and honest process, one where people can see over your shoulder see what you’re doing, they recognise their friends, the places that they work. . . . Importantly, they don’t feel threatened. They’re not made to feel uncomfortable or made to pose. . . . What this means is you’re very often afforded access to places that you wouldn’t otherwise be allowed to see.

“. . . [It] shows that you care about them, that you’re willing to sit and spend time with them. . . . There’s something very nice about the . . . handmade creative process that comes across because it’s so personal from start to finish.”

Great lecture at the @frontlineclub with @george_butler last night. Fantastic and inspiring artwork. Well worth the trip.

An audience member asked, does the activity of drawing act as a barrier, to put some of the emotions you have towards the scene into something?

“Absolutely, I think people have talked about how they can hide behind their camera when these sorts of things happen and the drawing board is a physical barrier. Certainly during the little lad in hospital [with an amputated leg] it felt like it was a way of distracting myself, just copying exactly what’s in front you rather than thinking about it for too long.”

Can illustrations ever be as powerful as photographs?

“I think the photograph is fantastic at its job . . . engaging a huge audience on the front page. But I think if you know a little bit about the subject or if you’ve seen a lot of photographs of the subject, which you sometimes have now then, illustration can be a great, layered way of capturing attention.”

Meer added on why he choose to run Butler’s illustrations in The Guardian instead of photographs:

“We’d run quite a lot of reports from Syria, insider reports, broader political pieces and you resort to the pictures that are available and they are the ones that everyone sees at the time. They do capture incredible moments but the minute you see something like this [illustration] it just captures something else. . . . I think they’re as haunting as classic conflict images.” 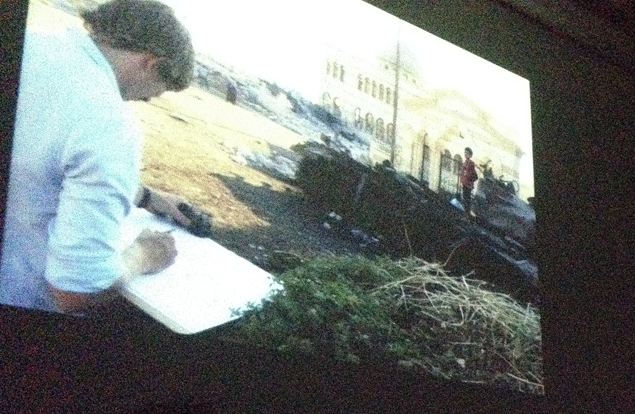 George Butler whilst drawing in Syria

But with illustration being such a subjective art form and Butler himself having admitted he leaves things out of an image or brings scenes to the forefront, where does he think the line between style and story should be drawn?

“For me sometimes when I’m on holiday or in a different part of the world, not in Syria, it’s quite nice just to draw things that you know you can make look good . . . but in terms of Syria it was always any kind of opportunity to draw because there was always a story to draw that was as important. . . . I suppose if you’re really true to reportage you’d have the two offering as much fifty–fifty, story and good-looking picture.”

It could be said that because they are such beautiful pictures that they lend a fairy tale-like quality to what is a very present war?

“Obviously as photographers or anybody creative you’ve always learnt to make things look good and yet the things that are in front of you don’t look in any way good. . . . I think people understand that as an artist . . . that you’re very much giving your interpretation of it. . . . I guess it’s just about being as honest to the subject as possible.”

Watch and listen the full discussion below: