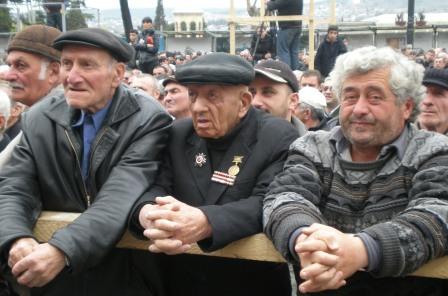 Under stony skies, a dirge-like ballad droned from the speakers outside the Georgian parliament: an appropriate soundtrack for the seventh day of opposition protests in Tbilisi. A series of opposition leaders was greeted by polite applause as they raged against Mikheil Saakashvili, the president who has refused to offer them his head on a pike. It started to drizzle; those who had umbrellas raised them. “All Georgia is here!” declared one optimist from the stage. It was not. These few thousand, or a good proportion of them, were the opposition’s hardcore perennials; the people we’ve become accustomed to seeing time and again at protests here down the years – the unemployed, the pensioners, the dispossessed and the desperate, chewing on sunflower seeds, spitting the husks, and smoking.

Despite what the Moscow propaganda channel Russia Today is saying today (“Sleepless nights for Mikheil Saakashvili"), the president has weathered the initial threat of political destabilisation, although – this being Georgia, where politics is often like theatre, played out on the street – there will undoubtedly be more to come in the future. In a small country with big problems, the next crisis is always around the corner…

Why has the opposition so far failed to rock the Saakashvili regime to its foundations, to send him running like the ‘scared rabbit’ they accused him of being as they lobbed carrots and cabbages over the gates of his presidential palace? Many analysts are marking this failure down to superior state strategy and cunning – the decision to let the demonstrators rally wherever they wanted, and not send in the riot police to crack heads, as Saakashvili did in November 2007, shattering his Western media image as democracy’s US-educated honour student.

The low-key policing massively reduced the chance of violent confrontation; a brief late-night altercation at the weekend showed how quickly tempers could flare. The president and his advisers seemed to be hoping that people would simply get bored and go home if there were no ‘provocations’ to stoke their ire and passion, and so far, that is exactly what seems to have happened.

Some correspondents have also suggested that a significant number of Georgians simply don’t trust the opposition – a fragile and sometimes fractious alliance of liberal democrats, belligerent nationalists, conservatives and street-corner populists – to do any better at running Georgia than Saakashvili. Some of the current opposition alliance are former regime insiders who’ve defected and now despise their former boss and all his works (which of course they once praised); others are the kind of veteran authority-baiters who would probably demonstrate against themselves if they ever came to power.

Nevertheless, the opposition has showed the kind of imagination which it’s been lacking for years. There’s been the cell-block reality-television show, the impudent antics of youth activists, and the decision to create tent camps outside the president’s office and the state TV channel, not just to block Rustaveli Avenue and harangue the public for hours on end, as protest leaders have traditionally preferred to do in the past. (Although, as ever, there was a lot of tedious speechifying on Rustaveli – more than enough to discourage most young people from attending for long.)

But so far – from the vantage point of Day Seven, at least – it simply hasn’t been enough. Critical mass has not been reached, Saakashvili has not fallen, and indeed has so far showed no signs of cracking, despite all the venomous insults hurled at his political record, his personal and dietary habits, and his mother.

I spoke to one oppositionist at the rally yesterday, a liberal lawyer who was involved in Saakashvili’s Rose Revolution in 2003 but broke with him on a point of principle shortly afterwards. I asked her whether she thought the protests had any chance of gaining momentum. She simply shrugged, sighed, and looked down despondently. “But we’ll continue, as we must,” she said. Even if these protests ultimately fizzle out, as last year’s did before them, one thing is certain: Georgia’s problems will be slow to solve, and sooner or later, the opposition will be back.