Only the milita who surround the journalist are willing to be interviewed. When he asked them what they thought, as Buddhists, of the fact that the junta had shot monks, they replied that it was not the monks who were demonstrating, but rather people desguised as monks, paid by powerful westerners to plant the seeds of chaos in the country. "And one sees there all the effects of propaganda," states Payen. link

The junta, facing a wave of national protests against its rule, has agreed to a visit by Ibrahim Gambari, a U.N. undersecretary-general… "But then the demonstrators may come out in full force. Then there could be heightened tension as a result," Yeo told reporters after meeting British Foreign Minister David Miliband. "If he fails, then the situation can become quite dreadful," Yeo said. "He’s the best hope we have. He is trusted on both sides." link

29 Sep 07, 13:00 – MinZaw: An angry crowd is now gathering around Magol Road, downtown Yangon. 29 Sep 07, 11:00 – MyoThant: All internet connection are down in Myanmar. Some technicians comment that they might have tested news coverage yesterday by temporarily shutting it down. 29 Sep 07, 11:56 second man: Junta’s strategies to squash demonstrators have changed a bit. It is reported that they will be using snipers to shoot down leaders. More systematic approach to corner demonstrators from both sides like yesterday in Pansodan Street. 29 Sep 07, 11:30 – MyoThant: A group of 88-generation activists are urging UN and US & UK embassies in Rangoon to open a 1-page web service via WIFI access to general public just to submit news photos (with user name: 2007, pw: 2007). Please write to them to request this. link

For updates throughout the weekend follow Burma-Myanmar Genocide 2007, Burmanews on Cbox, ko htike and (hopefully) newsblog. I will update as and when I can. UPDATE: 14:59 Paris time. More video out – purportedly from 27 September, 2007,

UPDATE: 15:08 Paris time. It appears naingankyatha, who is in Burma, has managed to get back online despite the internet outage to post more pics. This from 27 September, 2007, 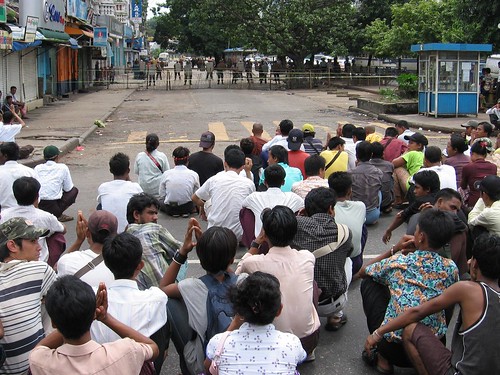 The demonstrators have been surrounded by security forces and pro-military vigilante groups, eyewitnesses said. The protesters are chanting slogans and taunting police, but no shots have so far been fired. The protest came as a United Nations special envoy, Ibrahim Gambari, arrived in Rangoon. link

UPDATE: 22:29 Paris time ITN has some footage from today. The BBC has more of the same. UPDATE: 22:34 Difficult to know where this footage is from and when it was taken. The presence of soldiers would suggest it is recent,

UPDATE: 22:43 The Times has a piece on the visit of the UN rep. Ibrahim Gambari,

UN, Chinese and western diplomats are attempting to pressure the Burmese generals to allow Ibrahim Gambari, the UN Secretary General’s Special Representative on Burma, to meet Ms Suu Kyi, the Nobel Peace Prize winner, who has been held under house arrest for 12 of the past 18 years. "What Gambari’s got to do is be prepared to provoke a crisis," a western diplomat told The Times in Rangoon this afternoon." If the stakes are high enough, it will be difficult for [him] to avoid that. What’s essential is that the UN needs to keep alive the issues that the monks have raised." "What has happened over the last four weeks has come out of fundamental grievances and suffering. The generals are trying to say, ‘This is just a blip – we’re in control.’ We need to keep up the pressure…to go back to the normal mode of operating is just impossible." link