Breaking Point: The EU Referendum and its Aftermath

The panel discussion ‘Breaking Point: The EU Referendum and its Aftermath’ on 15 November showed that whilst it’s hard to know how exactly what it means, there are clues about the shape it will take.

For example, despite the pivotal role migration played in the referendum rhetoric, migrants are likely to stay, argued Anand Menon, Professor of European Politics and Foreign Affairs at King’s College London. ‘We have no earthly clue who the European citizens in this country are, unless they’ve registered to vote or are getting a benefit,’ Menon said. ‘People are going to be allowed to stay,’ he remarked bluntly, ‘because we can’t do anything about it.’ The notion of ‘taking back control’ of our borders is ‘nonsense’ because the British civil service ‘can’t deal’ with the ‘kind of promises that some people in the Leave campaign have made, and they won’t try to’. 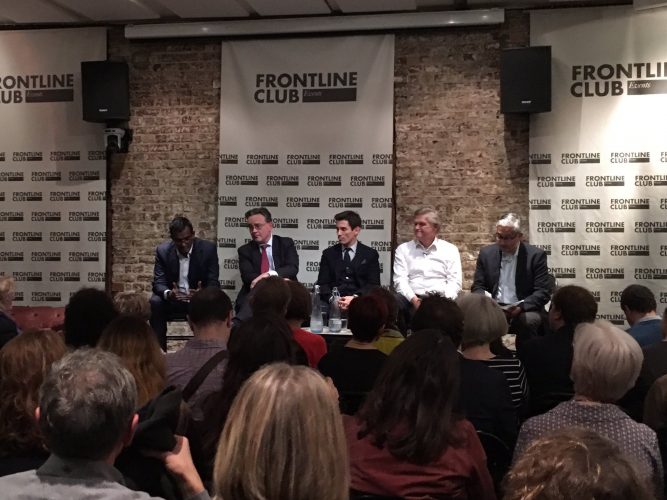 We also know that Brexit lends itself to European food based analogies. A ’kind of Swiss cheese Brexit’, in which different sectors get different deals, is most likely, Macwhirter claimed. However, Menon rebuts, any ‘deals’ at this point are moot; there is no evidence, he argued, that the EU will allow the UK to ‘salami slice the market’.

But food may not be as important as the analogies would have us believe. It’s simply not true that ‘Bordeaux winemakers’, Bojan Pancevski (The Sunday Times’ European Union Correspondent) warned, or producers of any other foodstuff or product for that matter, will successfully persuade EU governments to be lenient when negotiating with the UK for fear of losing market share. At least in Germany, the trade union bodies representing such individuals, Pancevski remarked, are on a record, saying they ‘completely agree with the government policy’. That government policy, currently, will not be one of doing favours for Britain. To avoid fuelling the rise of their own Eurosceptics, Menon argued, these governments ‘need Brexit to look dreadful’. The German Chancellery’s approach to Brexit and its message to businesses, he suggests, is similar to it’s approach to sanctioning Russia following its invasion of Crimea: ‘the political imperative is more important than economic loss, suck it up.’

Possibly most strikingly, we also know that Europe and the UK are in what Pancevski described as ‘parallel universe[s]’. For example, Britain is the only country in the EU with a political issue about freedom of labour, Menon argued. European countries, Pancevski said, don’t understand the phenomenon as ‘migration’, but rather as ‘internal movement’ within the European Union.

Furthermore, since the referendum, politicians and commentators have claimed that Europe needs the UK so much that it will change the rules, compromising freedom of movement to keep Britain in the single market. ‘We are very happy in this country to assume that everyone loves us’ Menon deadpanned. But the parallel universe strikes again, and obscures what is really at stake; the EU’s ‘primary objective’ Pancevski argued, ‘is to preserve their own union and above all to preserve the single market’. The EU’s fundamental four freedoms of goods, services, movement, and capital are, Menon claimed, ‘sacrosant’.