On 28th of May, Azerbaijan marked 91th anniversary of its first republic. Azerbaijan Democratic Republic or ADR as known by its initials is considered the first democratic republic in Muslim East with a functional parliament and clean record of human rights. As I wrote in my post last year,

Proclaimed on 28 May, 1918 and overthrown by Russian Bolsheviks on 28 April, 1920, ADR maintained a true democracy: gave a suffrage to the women (1919) and the youth, long before the main European nations did; created a truly democratic parliament, where assigned MP quotas to almost all ethnic minorities, and even gave special representation to workers’ unions; and made preparation to summon the Constituent Assembly (alas, interrupted by the Russian Bolshevik invasion). Besides, ADR remained strictly committed to the parliamentary form of government, where the Council of Ministers was accountable to the parliament, and was dismissed in the case if it lost the confidence of the majority of MPs.

While all state, public and private TV channels preferred to broadcast exclusively cultural content with concerts and patriotic songs, Azeri youth and youth movements decided to mark the anniversary with various flash mobs. Throughout the city, young people wore T-Shirts with a letter of ADR initials and posed for photographs in groups to form a full picture – "A.D.R." 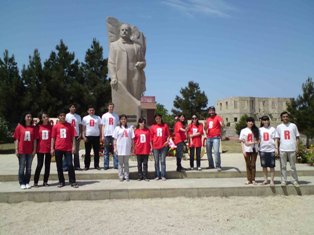 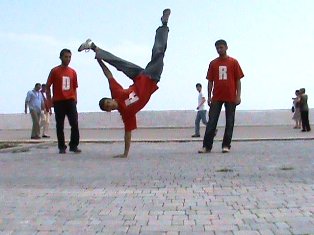 Some members of OL! Youth Movement drew an interesting graffiti dedicated to ADR:

And young members of oppositional parties paid a traditional visit to a remote Bakuvian village of Novkhani to lay flowers in front of a statue of Mammed Amin Rasul-zadeh, one of the founders of ADR. Despite Rasul-zadeh’s a prominent role in establishment and policies of the first Azerbaijani republic, his memory is in official exile in Azerbaijan. While his name was stripped from Baku State University (which he helped to found) and from school textbooks, and his image removed from national banknotes, the place in downtown where it was planned to erect a statue of him recently was occupied by a huge fountain.

Political Analyst based in Baku, Ilgar Mammadov has taken his daughter to the same fountain – in his words – to the statue of Rasul-zadeh that doesn’t exist.

Police has also harassed the youth who were engaged in flash mobs. As Ilgar Mammadov reports in his blog, police have detained three young people who had themselves photographed in ADR t-shirts near Baku’s famous Maiden Tower. According to Radio Free Euope/ Radio Liberty, this was not a single case – police have detained members of at least three youth movements, and it seems indiscriminately, as they have also rounded-up some people not engaged in flash mobs. Vugar Safarov from AN Network has told RFE/RL Azeri Service that they were detained while walking in downtown:

Policeman has approached us and demanded our IDs, and we gave them. Then they took us to 9th Police Division of Sabayel District. When we asked for the reason, they told us that they are investigating the reason. After a while one policemen said that we were planning a picket, thus they have detained us. One guy asked what picket is and the policeman answered that a flower picket. We declared that we were just marking the holiday. And they answered us that we should go and mark the holiday with a party.

This is not the first time when Baku police arrest young people while walking in the streets. 18 days ago they had arrested a group of youth who was trying to lay flowers in front of State Oil Academy, where a shooter gunned down 12 people, mostly students, before killing himself. The Government had refused to declare a mourning day in honour of the victims and proceeded with millions-dollar-worth Holiday of Flowers in honour of late Azeri president Heydar Aliyev, who is also the father of the incumbent Azeri President. When hundreds of youth and students took the streets to express their protest, police detained around 50 people, and just dispersed the protesters by force.

While foreign heads of states have sent their congratulations to the Azerbaijani government, "the young citizens of Azerbaijan" weren’t forgotten either. The International Federation of Liberal Youth issued a statement congratulating Azeri youth with the anniversary of ADR and expressed its support for "the liberal and democratic young people of Azerbaijan in their struggle for a more free and just society, as they are the rightful heirs of the Azerbaijan Democratic Republic."

Also, three Secretary-Generals of the Young European Federalists, European Liberal Youth and International Federation of Liberal Youth respectively have posted in Facebook a photo of theirs wearing T-shirts with ADR initials. As one young Facebook user noted in exitement, this was the best Independence Day gift ever 🙂 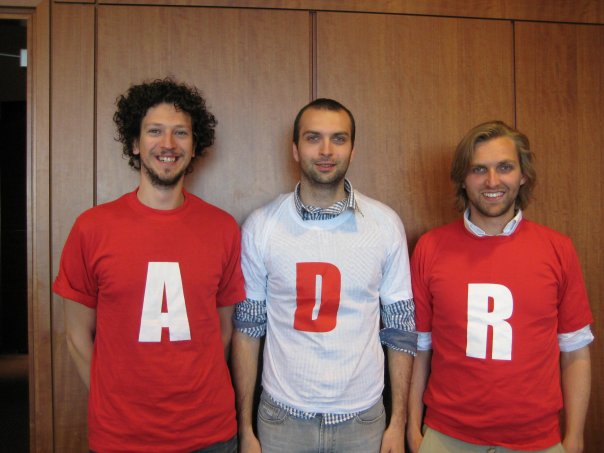