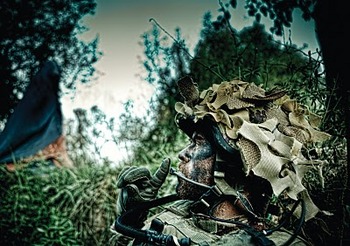 “You have to be here to understand it. This place is screwed, after all. This is a fucked up country.” – ISAF Team Seven
In the summer of 2009, marooned at military outpost “Armadillo” in Helmand Province, one of the most dangerous in Afghanistan and separated only by a kilometre from Taliban forces, the story of ISAF Team Seven’s deployment into the epicentre of the War on Terror attacks our senses in Director Janus Metz’s latest work, Armadillo (2010).
Articulating the region’s desolation and native population’s antagonism towards the Danish military unit with ominously quiet drones and a palette of dimly glowing light, this film artfully follows a tense moment of the ten-year long conflict with seriousness and courage.
Punctuated with fireside soldier commentary that describes the conflict as an “adventure” and also “so meaningless to grasp”, a view of the extraordinary story of these men, and the psychological processes they go through, is apparent.
At first, the picture demonstrates the desire of soldiers to enjoy themselves before departure. At home, Danish families offer parting words to their children, seeing them off after dinner table conversations to airports. It is a story that is familiar throughout the Western world. The film then describes the monotony of military life in training: routines, protocol, and discipline. Remedied with good times and quick thrills, the Scandinavian soldier’s handling of their deployment differs little from other nations in the international Coalition.
In Afghanistan, the men must gain the trust of war ravished Afghans, perform surveillance on enemy forces and endure Spartan conditions to achieve a UN Security Council mandate to quell conflict in the country. They also face rules of engagement, international scrutiny, and the consequences of inflaming Afghans with stories of atrocity.
Oftentimes, torment is seen in the eyes of the soldiers. The battle-hardened troops face the trauma of combat, and then assuage the many hardships by playing video games and jovially riding motorbikes in a surreal and outlandish environ.
In this picture, Afghans have faces and names, attempting to live a semblance of normal life in the middle of a war. There are real fears of breaking laws and damaging already fragile relationships with farmers and landowners. Eventually, relations reach a breaking point.
“Dismiss it as a rumor”– Danish superior officer
In one pivotal scene in the film, an allegation of a breech in the rules of engagement is addressed.  Confronted by a superior officer complaining about misconduct, the soldiers must justify criminally offensive statements made on the battlefield.
As the film concludes, we see contemplation and uncertainty affixed to the faces of the men whose mission and future appear grim. In speaking with the director after a special screening of the picture, The Frontline Club gained a portrait of a director’s approach to its concept and production. 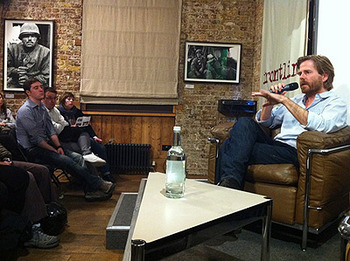 “Armadillo actually started out originally as a six part TV series for Danish television,” says Janus Metz, director of films such as Ticket To Paradise (2008) and Township Boys (2006). The film was made partly “to try and impact debate in Denmark” as well as to put “the question of what we were doing there” on the national agenda of that country.
In a way keeping with other nation’s attempts to have their Afghan commitments portrayed positively, Mr. Metz told The Frontline Club that the Danish military

“… had the right to security screen the film, which means they were given the right to see the film before release, to make sure it contained any information that could damage operation security, or would endanger national security.”

In not wanting to have the film censored, Metz ensured that they abided the letter of the law.

“They did try to stop the film while we were filming in Afghanistan, and they tried to get us to hand over our material, so they could screen it even delete material…We made case out of it, and in the end, they kind of dropped the idea…”

The Frontline Club also asked Mr. Metz about him and his daring crew at Fridthjof Film being fired upon and scared while filming.

“We were in fire fights several times a week. And the bullets were close, you could hear them flying right by your ear, you could see them hitting trees and walls right next to you… this feeling of surreal, unreal, it’s not real. It’s …once someone’s hit, it’s not real.”

For him, the experience contained

“a whole lot of adrenaline… you just go into this survival mode where you try to take care of yourself, you try to make sure that you’re safe, and focused on what you’re doing, and with time you focus on your job as well, which for me is filming.”

The lessons offered by filming in Afghanistan provides remains in keeping with the somber hue of the picture.

“I think I’ve learned that humans beings really have a dark side that is unleashed, or can be unleashed when you put people under enough pressure…”

For Danes, the issues addressed in Armadillo about the human beings under great duress in the Afghan conflict are complex and many. On the subject of the war itself, the director offered his personal expectation of the future:

“I think the situation looks increasingly difficult, and I think at some point we’ll have to realize that this is… a situation that we’re going to have to pull out of trying not to lose face, and that’s hard.”

With the strength of his work, and wartime credentials evident, it appears that in a new wording of old truisms on conflict we gain the most:

“I get my kicks out of filmmaking, not out of war.”