An unexpected visit to an Azeri village wedding 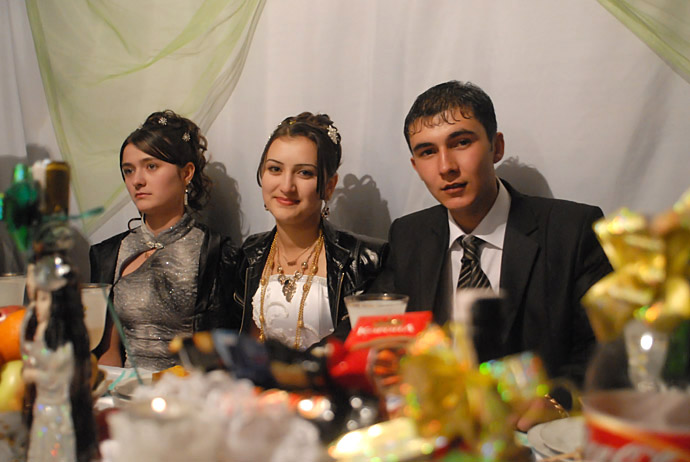 It was a dream come true. Despite knowing each other for several months online, the chances of meeting regional analyst and superstar blogger Arzu Geybullayeva seemed remote at best and unlikely at worst. As Arzu is based in Istanbul, Turkey, and Baku, Azerbaijan, it’s not easy for someone based in Armenia with an Armenian  surname to meet even virtual friends from the country’s easterm neighbour in the South Caucasus.

Armenia and Azerbaijan still remain locked in negotiations to find a peaceful solution to the 20-year-old conflict over the disputed territory of Nagorno Karabakh. Rhetoric from the authorities in Baku remains as bellicose as ever and the situation is hardly ideal in Armenia or especially among ethnic Armenians in Karabakh itself. Meetings between those from either country on neutral ground are often frowned upon by the majority population in each.

But always expect the unexpected in the South Caucasus, and a meeting of youth activists inTelavi, Georgia, saw the unlikely happen. With myself presenting a module on new media for the meeting, Arzu was also present as a facilitator for the Azerbaijani delegation. Picking her up from Tbilisi International Airport on Sunday morning, the two hour journey to Telavi provided a wonderful opportunity to finally speak in person, but the best was yet to come.

Ten minutes outside of Telavi was Karajala, a village Inhabited by approximately 8,000 ethnic Azeris in Georgia. As Arzu and I had often spoken about joint projects using traditional and new media to overcome the negative stereotypes of the other in play in Armenia and Azerbaijan, it provided us with the first of hopefully many projects along the same lines. What we weren’t expecting, however, was to walk straight into an ethnic Azeri wedding.

An article accompanied by my photos on Karajala by Arzu Geybullayeva will soon be available on Osservatorio Balcani e Caucaso while the both of us will blog more about the visit. Until then,  an audio slideshow put hastily together late last night is below. The whole experience was indeed a dream come true. Although I’ve interviewed Arzu by Skype for Global Voices Online before, little could I have ever imagined that not only would we finally meet, but we’d also work together.

Hopefully, the first time will not be the last.