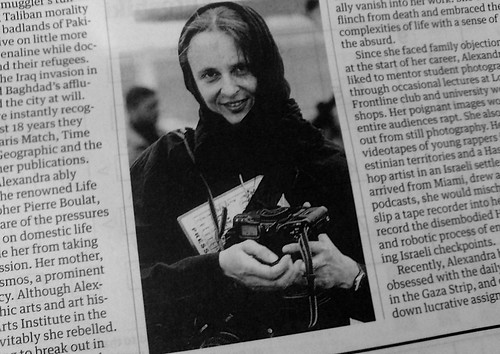 Photojournalist and co-founder of the VII photo agency, Alexandra Boulat has died at the age of 45 in Paris from complications of a brain aneurysm. She has previously spoken at the Frontline club,

This summer, as factional fighting between Fatah and Hamas militants came to a boil inside the Gaza Strip, Alexandra was uncharacteristically absent. After suffering a stroke in Ramallah in late June, she was taken to the trauma unit at Hadassah hospital in Israeli Jerusalem. As usual, Alexandra found herself at the vortex of political drama. Beside the concrete separation barrier, her Palestinian ambulance was halted while medics hustled her stretcher into a waiting Israeli vehicle, which sped away, blue lights blazing. Had Alexandra regained consciousness, she would have been keen to photograph the visitors inside this busy medical facility. Bedouin accident victims mingled with injured Palestinian workers and Israeli soldiers, and all were treated with brusque Israeli efficiency. As soon as she was stable, she was flown to Paris, but did not recover consciousness. She is survived by her sister, Antoinette, her mother, Annie, and Issa Freij. link

Here is Alexandra’s last lecture at the Frontline Club in June, 2007 where she speaks about working in war zones and her project on women in the Middle East.