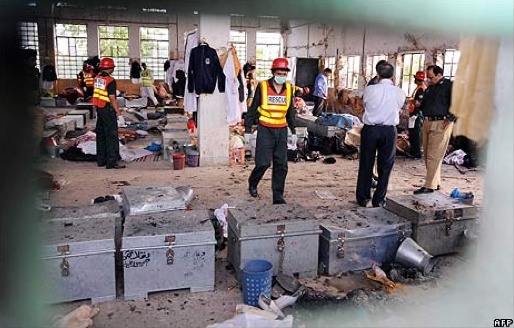 Munawan, : After 3/3, 30/3 was another event, filled with tragedy infused with confusion and terror. isn’t too used to taking all this.

7:30AM – 30/3: Another Terrorist attack—After Sri Lankan team, this time on in Munawa, some 14 KM from , more towards Wagha Border between and . Flew to the place while checking down the hospitals which come in the mid vicinity, and found some witnesses, who gave me their first account,” “7:00 am in the morning while the morning drill and exercise was going on, in the grounds of Police school, some six unknown men entered the building and threw hand grenades’, and later threw open the fire aimlessly on the trainee constables, and later occupied the building and now killing everyone inside while keeping police boys as hostages”.

9:30AM-30/3: Reached Munawa – From a distance of 1 mile from the original location as I started walking towards the Police Training School, I could hear uninterrupted rounds of firing. The old white colored building of training school was supposedly carrying some 6 terrorists inside. While it was surrounded by Army and Police, taking positions on rooftops. The terrorists had position themselves on the upper floor aiming from the glass windows, and using ruthlessly the arms and ammunition of the school.

10:30 AM – 30/3: Shootout continues, killing one civilian, and multiple police trainees, who tried to escape from the ground, where they had laid themselves on ground to cope with aimless firing on attackers.

4:00 AM -30/3: An unknown man carrying some hand grenades was trying to reach to helicopters parked near by. The man couldn’t understand local language, and had it appeared he was of Afghan origin.

4:30 AM -30/3: Severe explosion sound from the main building and then there was a continuous silence. Suspecting attackers had blown themselves.

5:37 AM -30/3: 20 minutes long army operation, continued firing and shootout and finally there was calm at the scene after the 8 hourrs long incident and the building was cleared. When it was declared that the attackers had blown themselves up by suicide bombing, the police and army entered, prohibiting media not to go in to spoil the evidence. After anout one hour, the scene was opened to the media.

Images Inside: It was a ruthless scene to report. Outside the four storey brick building, the building  had pieces of broken glasses of the windows. Bullet shells, and along with them some pieces of human flesh. The four attackers had blown themselves up. Their heads and body parts were scattered all over the fourth floor. Some pieces had busted out from the broken windows and were now to be seen on the floor, while the evening of 30/3 was setting.

Photograph taken from BBC News/AFP. This was originally posted to Phyza’s Frontline blog. You can follow Phyza’s reports from the Lahore and beyond here.