900 Days: myth and reality of the Leningrad blockade

The documentary looks at different perspectives on the blockade of Leningrad (1941-1944) during which approximately one million people died due to starvation and sub-zero temperatures. By interspersing footage of present day Victory Day parades with personal accounts from survivors, Jessica Gorter’s film illustrates the discrepancy between the different narratives surrounding the blockade:

Explained Jessica Gorter, referring to the Soviet triumphalism which can still be seen reflected in today’s parades and government rhetoric, and to the memories of survivors, which in many cases are too painful to share. 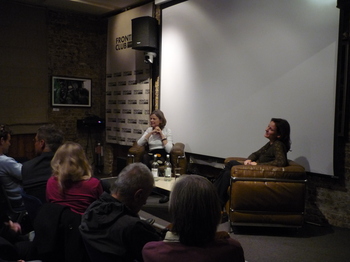 It was this dualism of memory, she admitted, that moved her to make this film:

"I was on a journey because I was trying to figure out, I mean I didn’t understand this enormous contrast that I encountered between the world version and the stories that people actually started telling me. That’s what triggered me to make the film, and this journey is what the film is about."

Anna Reid took the discussion further by drawing out similarities in the way the Second World War is remembered in the UK:

"When British historians started writing for the first time about the looting of bombsites during the blitz, about crime during the blitz and the black market, about collaboration in the occupied Channel Islands – that was very uncomfortable. That didn’t happen for a long time after the war, … so this isn’t just a Russian thing, rewriting the war. But in Russia you have … decades of censorship so it’s more acute."

Anna Reid was quick to point out that the film sought to explore:

"Then at least you leave room for the people themselves."

Despite the film being currently barred from Russian TV by companies who are nervous of causing offence, 900 Days is so far creating an opportunity to provide this ‘room’ off screen as well as on it by starting new conversations with the next generation:

"It’s very difficult to have normal discussions about it [the Leningrad blockade]. Which is why it was really special when this premier happened in St Petersburg because all of a sudden the discussions started. There were a lot of young people, I was really surprised, … and they also were in tears afterwards telling me that they didn’t know about it."

For a taster of the film watch the trailer: