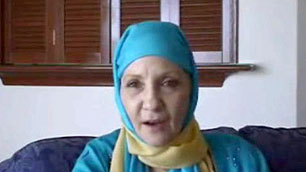 The Globe & Mail reports that a ransom demand of $375,000 has been made by the Taliban kidnappers of Beverly Giesbrecht who has been held hostage since November 2008. The paper says the demand came during an interview with a man calling himself Qari on the Pakistan-Afghanistan border who said only money would secure her release,

“Once negotiators approach the Taliban … then definitely they will work out the timing and conditions for her release,” [Qari] said.

“She is safe and sound, for she is very precious for us. She has the freedom to interact with our female folk, whom she has got used to. Inshallah [God willing], she will not be harmed and we are confident that our demand will be accepted by the concerned government,” Qari said.

“She is provided with the best available facilities including food, medical care,” he said, although he acknowledged he had not seen her himself.

“She seems to be very encouraged with the reports that Taliban will spare her life in exchange for ransom,” he said. link

Giesbrecht, a 52 year old freelance who also goes by the name of Khadija Abdul Qahaar, was freelancing for Al-Jazeera when she was abducted. A previous ransom demand of $150,000 was reported in January and she appeared in a video released by her captives in February.