The Q&A began with a question about our role as consumers in maintaining the power of the tabloid press, and Peppiatt‘s lack of focus on this issue. Peppiatt responding by explaining that they had always wanted the film to be one hour long, and that it was first and foremost a comedy film. As a result, there were certain perspectives that could not be focused on in detail.

“The film started out as a stage show, and so the stunts were filmed . . . individually, without a narrative. We didn’t have a narrative in mind, we just filmed them as separate entities. . . . It worked for a stage show . . . I could do some stand-up in between it and it all pinned together, but then when you’re actually going to make a film about it, it was quite difficult to then impose a narrative on it.”

In addition, Peppiatt explained that, while they wanted to “make a point”, they were always considering the best way for the comedy to come through.

The Daily Mail, and its website, the Mail Online, was mentioned several times throughout the Q&A, with Peppiatt stating that, due to its success:

“All of the broadsheets are trying to be more like the Mail Online . . . because they know . . . that’s where the money is.”

However, he argued that just because it is successful, does not mean that it is morally right. He went to say:

“The minute you start reducing morality down to sales, you really have bought into the ultimate capitalist system ever, where everything is defined by who will buy it, and that’s not a society I want to live in. . . . The capitalist system has overtaken some of the very noble parts of our society.”

While explaining that he is not anti-capitalist, Peppiatt said that the state is not the “most powerful entity anymore”. When Purvis asked him why this is a bad thing, Peppiatt responded by saying that people vote for governments not media moguls who head up corporations, and which now have been allowed to have “zero accountability and massive power”. 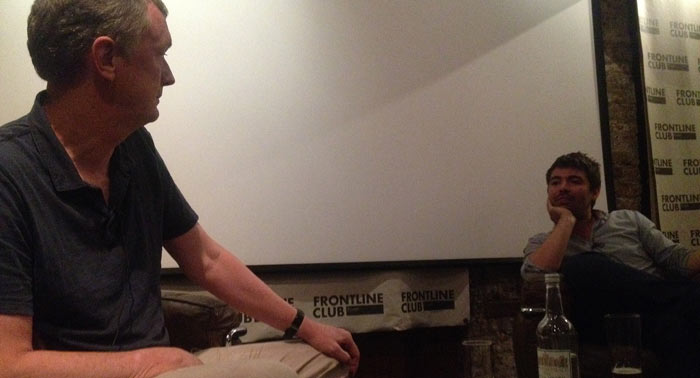 When discussing the power of the tabloids, Peppiatt told the audience that he knows that the tabloids are watching him carefully, and that he has made a lot of people angry. However, short of recording everything he says in public, they are unable to take any action. Peppiatt explained that they were very careful when making the film, and were constantly aware of libel laws. In addition, any action the tabloids take against him, can be used to publicise the film and expose the double standards of tabloid newspapers try to censor someone. Anyway, Peppiatt elaborated, “I’m too insignificant to bother writing about.”

In response to a question about the general public’s opinion of journalists, Peppiatt said that, currently, the public’s “trust [of journalists] is below politicians. . . . The trust of journalists is so low . . . that the whole process is undermined.”

Purvis asked Peppiatt if he will go back to “journalism with a capital J”? Peppiatt replied that he is happy with the type of journalism he is doing now; he and Jefferson “have a few a short films lined up”. Ultimately, he said, they have always wanted to do ‘comedy journalism’, involving the public embarrassment of ‘bad people’, and they hope that their version of reporting will engage people in current affairs.