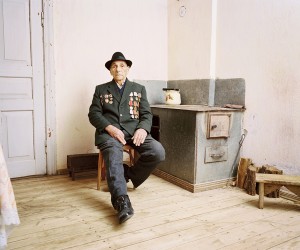 Eshera, ABKHAZIA, 2009 – Mikhail Yefremovich Zetunyan (88) sits in his living room with a magnificent view of the Black Sea. Despite the subtropical climate and stunning location most of the houses in Eshera are empty. During the war with Georgia in 1993, all the ethnic Georgians were driven out. Young village residents were killed in the fighting. Only a quarter of the village’s population remains. There are simply not enough people to keep the village going, leaving everything to fall into further disrepair. Mikhail Yefremovich doesn’t care. He feels his time has come and is busy making his own coffin.
© Rob Hornstra/INSTITUTE