#Winnenden and Twitter: German media’s conversation of a shooting

Two months have past since Germany was stunned by a killing spree in which 15 people died in Winnenden, just north of Stuttgart.

At about 0930 on March 11 a former pupil of the Albertville Secondary School walked into the school and began shooting pupils and teachers.

He killed nine pupils and three teachers. He fled the school and shot and killed three other people before turning the gun on himself and taking his own life. His last moments were captured on a mobile phone video camera.

It was a major event in Germany for the media and also on the micro-blogging network Twitter. However, it’s interesting to look back at how German media used Twitter for newsgathering, reporting and communicating with Twitter users.

As the headline above suggests, if German media pinned their hopes on Winnenden being their first big Twitter event, a Twitter Ereignis –  a test case where Twitter users quickly provide dramatic front page photos, a river of descriptive tweet-quotes from the scene and a way to contact eyewitnesses, then it didn’t work out that way. In fact, Winnenden may have set back the German media’s credibility in how they use social media for reporting.

The German word for gun rampage or killing spree is Amoklauf. A simple connection of the Indonesian word amok, that you’d no doubt recognise, and the noun Lauf – meaning run. Lets keep that in mind for later.

Along with #winnenden, #amoklauf or #amok were terms used on Twitter to discuss the shootings, and by German media, who turned to Twitter to gather any information, photos, or interviews with people at the scene.

It’s widely acknowledged that @tontaube was the first to post a tweet about the shootings in Winnenden. Note, it was about an hour after the shooting began.

"Attention: In the Winnenden high school today there was a gun rampage, the perpertrator is supposedly still on the run – best not to come into the city!!!!"

@tontaube’s first tweet was a warning to her friends and followers. She sent this tweet from her office located a few kilometres from the Albertville Secondary School. What she tweeted was accurate. There was a shooter at large in Winnenden, but @tontaube was relaying information passed to her from a colleague whose husband phoned to say he was stopped by police on the road leading to the school.

Her 129 character tweet began to gain traction. In an interview with a youth programme on Bavarian public television BR, @tontaube said she was first contacted by the media about an hour after her initial tweet. German tabloid Bild was the first to reach her, then other media including N-TV, Stuttgarter Nachrichten and CNN – all of course seeking updates and interviews.

BR’s interview with @tontaube also shows she posted tweets making it clear to followers and journalists that she was not at the scene and was tuning into local radio reports for new information.

And, there lay one of the main problems for the media trying to use Twitter in Winnenden. There just weren’t active Twitterers in the immediate vicinity of where the shootings were taking place.

Lets back track a little bit and look at how one media outlet used Twitter to cover the story. After news of the shootings broke, journalists from the magazine Focus scrambled to get down to Winnenden to report.

One of the first steps of the Focus team was to open a new Twitter account dedicated to this event. But the username they choose to report events and communicate with the Twitter community instantly drew fire for being inappropriate – @Amoklauf. 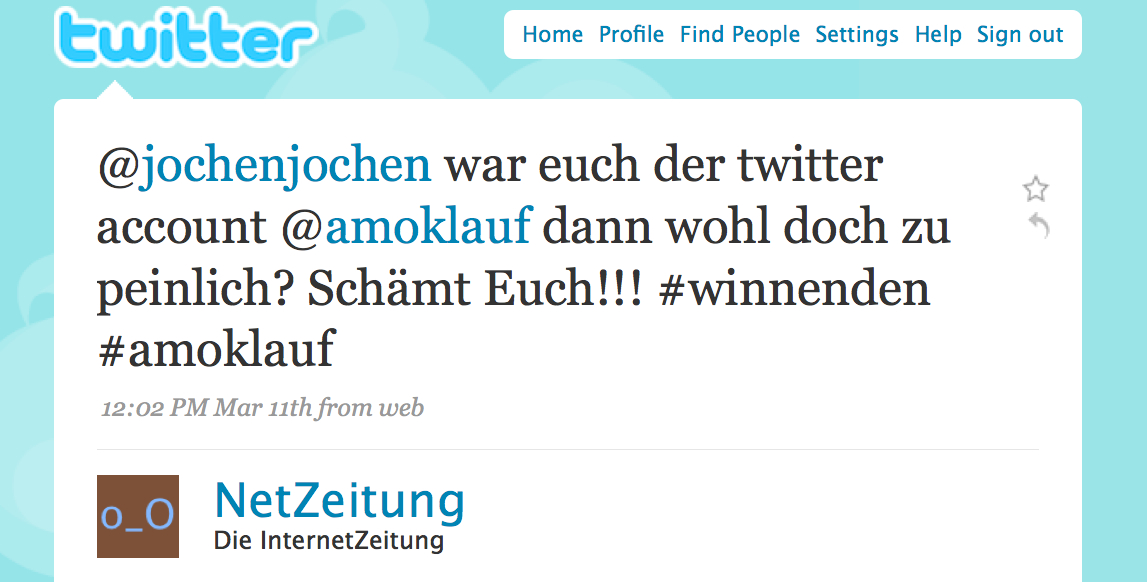 "@jochenjochen was the twitter account you chose @amoklauf actually too embarrassing for you? Shame on you!!! #winnenden #amoklauf"

Perhaps to put it in an English context, it would be interesting to consider how English speaking users of Twitter in similar circumstances would react to a journalist gathering information via a new Twitter account called @gunrampage or @killingspree.

Of course, you could also argue: what’s in a Twitter name? Does that even matter? Afterall the term or phrase was used in headlines and TV news graphics. But I think it runs deeper than that. Will you have credibility in the eyes of Twitter users if you’re starting from scratch with a new account – even if you are a big media brand? Have you thought about your Twitter ‘tone’ or ‘voice’? Do you know and understand your audience on Twitter?

In the case of Winnenden, German media seemed to be going through a lot of learning by doing on a big story.

Focus soon backed down in the face of protest. @Amoklauf was deleted and @FocusLive was used instead.

But, even then, @FocusLive was not winning fans. In a blog post about Twitter and Winnenden, journalist and blogger Stefan Niggemeier points out that the journalists using @FocusLive were at first tweeting more about how they were getting to Winnenden or needing toothbrushes if they stayed in town overnight, rather than offering any new information. I think Herr Niggemeier raises some good points for journalists to consider their purpose and method of using Twitter on a story such as a mass shooting.

In response to criticism about their use of Twitter, Jochen Wegner, Chief Editor of Focus Online, said:

"We will find
a way to use Twitter and other social networks, that fits both the networks and the journalistic standards. Ironically we’ve been also heavily criticised, for not communicating via Twitter and only posting links of our reports."

If Twitter during Winnenden did not prove to be effective for news gathering it certainly helped to point out the media’s errors in reporting the event. Here’s a useful example from Twitpic 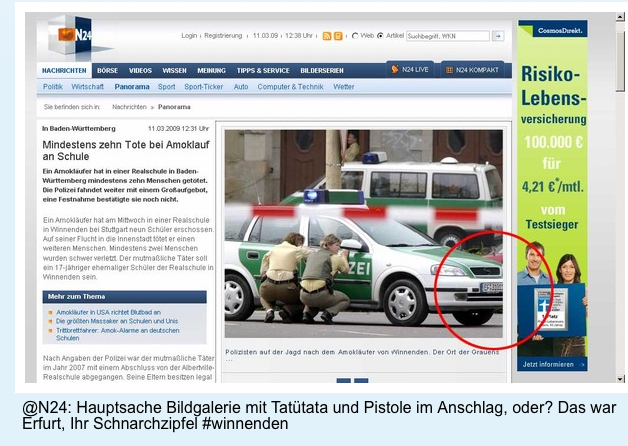 The caption reads: "@N24: What matters is a photo gallery with flashing lights and pistols drawn, or what? That was Erfurt, you losers #winnenden"

Twitter user @brunser noticed that the German TV news channel N24 was using a photo from the 2002 Erfurt shootings in their online reports of Winnenden. @brunser has circled the police car number plates that give the game away, and even sent a couple of cheeky tweets to the channel’s @n24_de and @N24 twitter accounts to point out their error. However, there’s no public reply to @brunser from N24 acknowledging their actions.

If I’m painting a gloomy picture of German media using Twitter then that’s not what I set out to do. There are several media outlets using Twitter to good effect. I do like the way for instance regional newspaper Der Westen is using Twitter to engage with readers. I check out their stories online because of the way they tweet. At the heart of it, Der Westen is keeping it simple. They appear to know their audience, they’re being social and I think winning respect.

Looking wider, debate in Germany still continues over how the media used photos and videos of victims and the teenage shooter from social media sites. That’s another story. However, I’ll end this post with some Twitter thoughts from Marcus Boesch – aka @blogschau. Marcus produces a weekly blogging and social media programme on German international radio. I asked him how German media views Twitter and social media for news gathering.

@Blogschau discusses Twitter and Winnenden from Guy Degen on Vimeo.