The event, which will take place on 2 July at the Troxy in East London, had originally been tentatively scheduled to take place at Logan Hall, a 900-capacity auditorium hired out by the IOE.

But after expressing strong interest in hosting the event, arranging logistics, and giving Frontline Club staff a tour of the venue, the Institute’s management performed a sudden about turn. 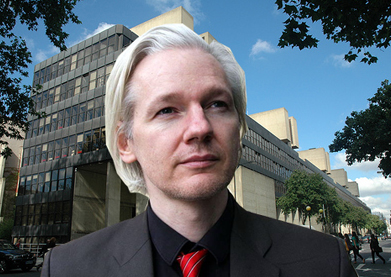 An email sent on 16 May from Michael Walker, the IOE’s Head of Conferences, Catering and Operations, informed Frontline: “There are ongoing issues concerning wi-fi access and the provision of a bar for your visitors, the first of which I feel may be too difficult to resolve at our end.

“This – and the fact that the meeting’s subject is of a nature which may attract considerable controversy – obliges me to inform you at this stage in the proceedings that we cannot offer hire of the Logan Hall on this occasion.”

Frontline Club founder Vaughan Smith was puzzled by the decision.

In an email sent on 17 May, he responded: “We do not feel that the issues with wi-fi and bar would prevent us from using your venue.

“However we are shocked that the Institute of Education would have difficulty accepting our event on the basis of a feeling that it may be controversial.

“The speakers have all spoken in London before several times and both generate significant interest and support from within the public. Neither generate any risk of violence at the event.”

Smith pointed to the IOE’s Research and Governance Policy, which states as part of its mission that it will be “guided by a concern for truth and justice, and make a positive contribution to the development of individuals, institutions and societies facing the challenges of change.”

But in a reply, Walker claimed that it was not the subject matter alone that was the reason for refusal.

“It seems I have mistakenly conveyed the impression that the nature of the event’s subject matter was in itself enough for us to decline to host it,” he wrote.

"This is not the case – and the concerns which have informed the decision centre around our ability to cope with the booking in the event that negative issues (including those connected to public order) are raised by it.”

He added: “The Institute reserves the right to withhold hire of its facilities and although I will certainly refer this matter to the Director of Administration here there will be no change in the position should the decision be ratified.”

Assange, who has been on strict bail conditions at the Norfolk home of Smith for over six months, was informed that the IOE had declined to hire the Logan Hall for the 2 July event on the grounds that it “may attract considerable controversy“.

He said in response: "This is how everyday political censorship works in the United Kingdom, not jackboots at the door, but through tawdry institutional pandering."

Chaired by award-winning investigative journalist Amy Goodman, the event will see Assange and Žižek discuss the “ethics and philosophy“ behind WikiLeaks. It will be broadcast live across the internet by independent US news broadcaster, Democracy Now!

On the same day, the IOE’s Jeffery Hall will host the Association of Church Accountants and Treasurers’ Summer Conference, which will feature a talk from Gareth Morgan, a senior leader at Everyday Champions Church, Newark. Morgan will discuss “the challenges of being an effective church in the 21st century.”

The IOE was founded in 1902 as a teacher training college in London, and says its “history and current mission are rooted in a commitment to social justice.”

It is part of the University of London: a publicly funded institution which was established in 1836, making it one of the oldest universities in England.

A spokesperson for the IOE denied that the event had been turned down because of controversy surrounding WikiLeaks, and stated the decision was taken due to concerns about public safety and ease of access for students and visitors.

"It is true that Mr Assange is a controversial figure at the moment, because of WikiLeaks but also because of attempts to extradite him to face criminal charges," the spokesperson said.

"As such, and given the proximity to Mr Assange’s next court hearing [on 12 July], it was felt that this event was likely to attract a significant amount of external interest from both the media and the broader public.

“While we can understand Frontline’s disappointment at not being able to host this event at the IOE, we must always put the welfare of our students, staff and guests first and we judged that we would not have the resources to safely steward an event of this kind without our students and other visitors having their access to facilities disrupted.”