Why the revolution should leave Midan Tahrir, for a moment at least

Davide Morandini on the opposition’s decision to suspend demonstrations, and cancel today’s protests calling for the Supreme Council of Armed Forces (SCAF) to step down. 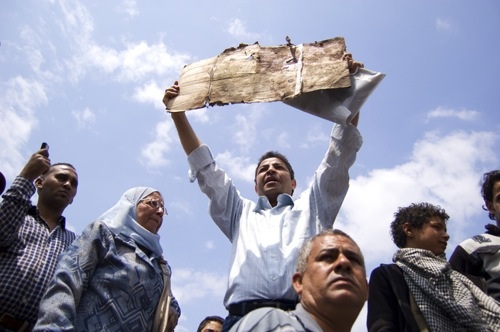 There is not much to do in Midan Tahrir for the revolution, now less than ever. This is what most of the Egyptian opposition forces seem to realise in these dramatic days of chaotic protests. The Midan falling back into some kind of surreal ‘normality’ is certainly not the result of the Army’s violent, ruthless comeback, neither of a loss of revolutionary fervour by the forces of the opposition. It is a sign, hopefully of change.

On Thursday morning, soldiers and volunteers in downtown Cairo were planting flowers in the Midan and painting walls and pavements in white and black, as if covering the written signs of a country in uprising would make people forget about how much they have achieved so far.

Last Saturday, two desperate parents wandered crying around Tahrir for hours, showing people a bloodstained piece of carton carrying the dimm el-shaheed, the blood of their martyred son killed in the Midan on Friday, while the Army was reportedly shooting in the air in order to frighten what they still want people to think is only a small group of violent dawdlers. Will I ever forget those crying faces?

Sharif, one of the shebab temporarily opposing protests in Tahrir, says there are three different kinds of people: 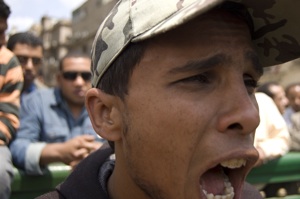 One of the Army’s strongest points lies in the power of a dialectic, enforced by media still subjugated by a corrupted political system, aiming to divide those in favour of the revolution, keeping them at home and turning them into sceptical observers from afar. They say the people in Tahrir are baltageya, professional thugs whose job is to throw the country into anarchy and chaos, occasionally selling hashish during breaks.

The baltageya is indeed an actor on stage, but is a double-edged one. Even two inveterate supporters of the baltageya like Hosni Mubarak and former Interior Minister Habib el-Adly committed their last, fatal mistake by ordering the opening of state prisons on 28 January. The sight of “pro-Mubarak” supporters riding camels and storming into the crowd to beat peaceful demonstrators made protesters squeeze up.

Even those who already made up their minds and wanted to allow Mubarak to stay until September elections, suddenly found themselves shouting for his ouster. Almost three months after those events, the baltageya‘s double-edge is still a highly destabilising factor in the country, fully exploited by those reactionary forces willing to thwart the country’s path towards political normalisation.

But this is not enough. As a small number of Army officials joined demonstrators and refused to take off their uniforms last Friday, many protesters smelled a rat. This intrusion disclosed a glaring sign of division within the Army, but at the same time it legitimised the intervention of security forces. 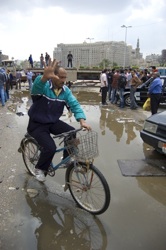 After seeing them shooting in the crowd and clearing out the Midan, many protesters still fool themselves into thinking that the Army is the people’s only guardian, and that those who cleared out Tahrir were mercenaries paid by Mubarak’s personal friend and business Ibrahim Kamel. Even in this case, where was the Army when the people needed protection? Egyptians have to realise that the time – if there was ever one – when the people and the Army were iid wahda (one hand) are now definitely over, and handing over power to a civil presidential council is the only solution for the time being.

Here we come to the point. The recent escalation of violence is a sign that the Army’s divide and rule agenda is being successfully put forward. This urged the opposition to wisely call for a suspension of demonstrations, and for the cancellation of Friday’s milioneya, the march of the million calling for the Supreme Council of Armed Forces (SCAF) to step down. This does not mean that revolutionary forces are satisfied with the Mubaraks’ or Kamel’s – fake – prosecution. “Our revolution is not against Mubarak,” one of the activists involved in the movement for the ‘Protection of the Revolution’ reminded me. “Our protests aim at a reversal of the 1952 coup d’état and the institution of a civil Presidential council”. Indeed, Field Marshall Mohammed Hussein Tantawi is a military man, like Mohammed Naguib, Gamal Abdel Naser, Anwar Sadat and Hosni Mubarak before him.

When I asked an Egyptian friend for a definition of the baltageya, he told me “a baltagy is either someone who pushes you to do something you do not want to do or someone who prevents you from doing what you want to do.” Suspending protests this Friday means avoiding that open (and suicidal) confrontation the Army has been looking for since they mingled with those violent enemies of the people’s rightful demands.

The revolution has been played out in many other fields, but Midan Tahrir still remains the battleground for the protesters’ main political demands. Celebrating a new Friday of protests with an empty Midan Tahrir amounts to an important step towards the realisation of the revolutionary agenda, and shows that the revolution is gaining ground on, and understanding of, an increasingly chaotic panorama, remaining loyal at the same time to its peaceful character and refusing to bow heads in front of the SCAF’s cosmetic adjustments.

Davide Morandini is an Italian freelance photojournalist based in Cairo, Egypt. He reports for the Egyptian online newspaper Bikya Masr, and his personal blog is called caironichles.