Who Are Somalia’s Al Shabab? 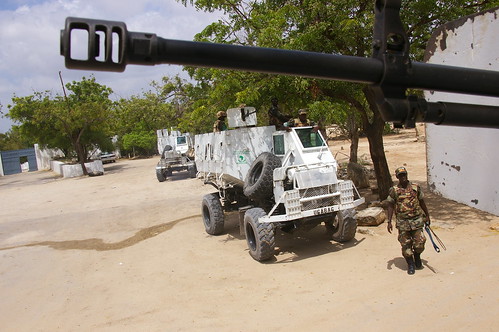 Two years ago an alliance of moderate Islamic Courts ruled Mogadishu and much of Somalia. Then Ethiopia, fearing a stable and prosperous Somalia â€” and hungry for access to Somaliaâ€™s ports â€” destroyed the Islamic Courts and propped up the unpopular Transitional Federal Government. Islamic insurgents rose up to challenge Ethiopian and TFG troops.
But who exactly are these Islamists? They call themselves â€œAl Shababâ€ â€” â€œThe Youthâ€ â€” but they appear to have comprised at least two distinct groups in recent years.
The Combating Terrorism Centerâ€™s Sentinel journal (pdf!) says Al Shabab originally

may have emerged in 2004 partly as a reaction to a failed CIA attempt to capture one of the three Somalia-based al-Qa`ida operatives wanted in connection with the 1998 U.S. Embassy bombings in Kenya and Tanzania.

For years it was the centralized armed wing of the Islamic Courts: the Ethiopian invasion appears to have mostly destroyed that organization. But the TFGâ€™s failure to win popular support, plus widespread opposition to the Ethiopian occupation, has driven new recruits to the Al Shabab banner, Sentinel claims. Now

it appears that the command structure of al-Shabab may have been decentralized and the group broken down into cells to give regional al-Shabab commanders greater independence to carry out attacks when and where they see fit.

â€¢ The mujahideen have adopted new operational techniques never used in the region before (though further details of these techniques are not given).
â€¢ The mujahideen succeeded in cutting off enemy supply lines by planting booby traps on the main routes.
â€¢ The mujahideen liberated cities and whole regions occupied by the enemy. They also stormed enemy barracks at Baledogle military airport (about 60 miles west of Mogadishu) and in more than eight Somali directorates and governorates.
â€¢ The types of Somali jihadi operations conducted for the last year and half include urban ambushes and raids, suicide attacks, artillery and rocket attacks on enemy positions such as the presidential palace and the airport in Mogadishu.