Where is the rain?

"Where is the rain?" That’s the question on everyone’s lips these days in Phnom Penh. The full-on rainy season was supposed to have started a month ago. Normally every day like clockwork, a downpour would start in the late afternoon, sometimes lasting an hour, sometimes lasting late into the night. An additional morning rain also would not be uncommon. That’s how it was during my first monsoon here last year. Yet this week, I can only recall a slight drizzle three or four days ago.

It’s been several weeks of what — granted I’m a newbie here — seems like completely abnormal weather for the season. And with the lack of rain comes unbearable heat, the kind we normally only suffer through in April-May and that is now dragging on. In June, I should have a raincoat permanently in my bag; I haven’t even bought one yet this year.

The rainy season started early actually, with downpours in April that had you wading through thigh-high waters. The meteorology services warned that that could mean an early drought in July and recommended farmers use fast-growing rice varieties. I wonder how they’re doing… I got a chance to go to northwestern Cambodia last week (around Battambang and Siem Reap), where there are large plains of rice fields, and fortunately, it’s much wetter and greener there. Hopefully, only us city folks are suffering.

A reason for all this? I’m no scientist. It could be just a freak year as have existed throughout Earth’s history. It could be a consequence of Cambodia’s anarchic use of timber ressources: one theory for the demise of Angkor is that it got so big and deforested so much for its economic development that it disturbed its own rain patterns and fizzled from a lack of water. It could be just one more anecdotal evidence of global climate change. 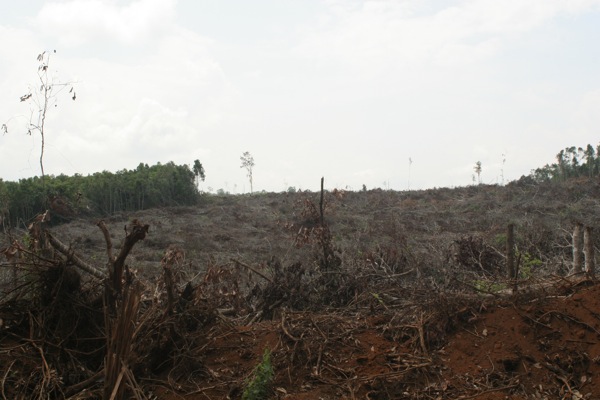 Deforestation looks like this! The Bolaven plateau, in southern Laos, here photographed on a motorcycle trip last March, is famous for its coffee. To make way for Vietnamese-owned, industrial plantations, the little-developed plateau is being slowly stripped of its primary forest. 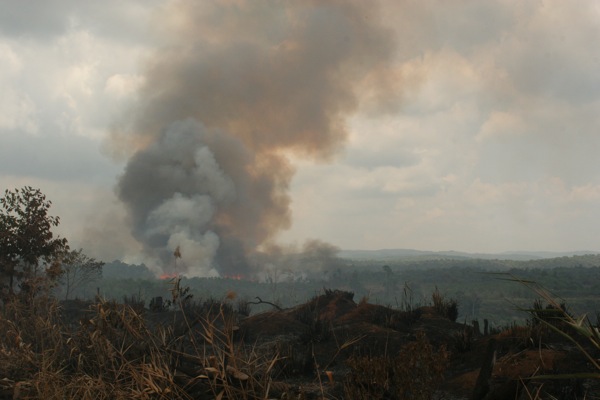 Slash-and-burn is the traditional method of culture on the Bolaven plateau. As traditional as it may be, it’s not very sustainable, and when it’s used on an industrial scale like here, it’s a vision of environmental apocalypse. Flames were coming right up to the road: an inferno of heat and smoke to drive through. And live in for all the indigenous population there.

If you’re not convinced, I recommend watching Home, a film granted a tad formulaic in its visuals (Yann Arthus-Bertrand sticks to his proven formula of graphic earth views from a helicopter… the same shot, albeit beautiful, repeated over and over for 90 minutes) but also a needed wake-up call. Tracing the history of earth, man and climate, it goes from science lesson to scary movie (images reminiscent of The Matrix, only it’s real Earth. Enough to bring tears to my eyes.) to inspiring conclusion. "It’s too late to be pessimistic." So go plant a tree and give us rain.

(Where was I? Let’s just say under a bit of a gag order for professional reasons. I am now in a new job, happily learning documentary film-making, and fully back to blogging. More coming soon from Cambodia…)